10 Whitetail Hunting Myths You Might Still Believe, But Shouldn’t

OutdoorHub
10 Whitetail Hunting Myths You Might Still Believe, But Shouldn’t 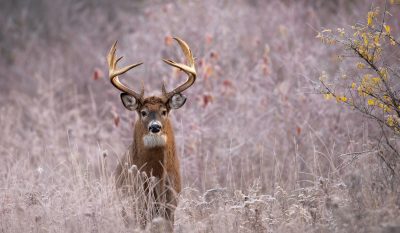 There’s an abundance of myths – or “fake news” – going around the world today, and that includes the deer hunting world as well. These myths might be rooted in some version of truth, however they’re typically based on extreme cases, small sample sizes, and false information. Moreover, some hunters may not be able to come to grips with the fact their grandfather’s deer hunting knowledge may have contained a bit of hot air. So, we decided to punch some holes in these age-old whitetail hunting myths.

Full disclosure, I admit I’ve believed in more than half of these at some point in my life. But a little research and education fixed that, and I’m now a better hunter because of it! The  bottom line is, don’t be afraid to question something or reach out and ask another hunter who has more experience. You never know when one little kernel of information will turn into a freezer full of deer meat!

1. Myth: Buck-to-doe ratios get out of whack and can reach seven or eight does per buck

You may have heard another hunter complain about his 1:10 buck-to-doe ratio being stacked against him. Well, just know it’s extremely difficult to accurately determine a ratio higher than 1:5.

2. Myth: A buck will completely vacate the county when spooked by a deer hunter

There are a number of studies out there which actually suggest the opposite. Instead, deer will likely avoid traveling during daylight hours, confine themselves to smaller core areas, and won’t venture too far from bedding locations when hunting pressure ramps up. But they won’t necessarily run for the hills the second they see you walking in the woods.

4. Myth: When a buck’s lips curl, he’s scent checking for does to see if they’re in estrus

When a buck makes a face like the image above, any urine scent coming from a doe passes across the vomeronasal organ (Jacobson’s organ) located on the roof of the buck’s mouth. This actually confirms the myth is false because that particular organ doesn’t lead to the decision-making part of a deer’s brain. Instead, it controls the physiological and reproductive responses, so by lip curling it’s preparing its body for peak breeding status.

5. Myth: The dominant bucks breed all the does

This one should be screaming off the page at you, because it is virtually impossible to have any influence on antler production by taking out “bad genetics” in bucks. If you really want to see big bucks on your property, focus on things you have control over. Let deer get older and feed them more nutrients that will support healthy antler growth.

7. Myth: The October Lull is real

This is a popular one hunters complain about each year, but it’s really nothing more than a misunderstanding. See, study after study has pointed to the fact that deer movement doesn’t magically decrease during the month of October. The real reason hunters see fewer deer during this time is because deer switch things up themselves and transition from summer to fall ranges between mid-September and early October. They’re also in search of fall food sources which takes them away from the areas where you might have been seeing them leading up to the season. For this reason, hunters must constantly adapt too.

There is still much to learn about rubs and rubbing behavior, but experts now recognize deer use them as a way to communicate with one another. Both bucks and does.

10. Myth: A spike will always be a spike

It was often thought that young basket rack bucks or spikes will never grow big antlers. Some hunters who place a premium on big antlered deer believe these “inferior genetics” should be thinned out of the herd. However, it’s been proven the primary factor leading to giant antlers is time. Eventually, with time, that spike on your trail cam will morph into a trophy-quality buck.

Learning from individuals who have extensive experience in the woods is something all hunters should take advantage of. Just be wary and mindful that relying on one man’s hunting beliefs could seriously hamper your success. Venture out of your comfort zone and switch things up. Try new approaches and fail over and over. That’s how you will learn, and ultimately become a better hunter!