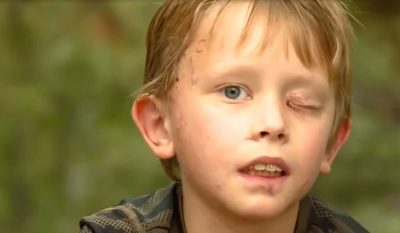 Chilling new details have come to light regarding a backyard mountain lion attack on an 8-year-old Colorado boy after it pounced on him in his own backyard.

As previously reported, the attack occurred back in August while 8-year-old Pike Carlson was playing with his brother, Gage, in the backyard of their Bailey, Colorado home. Pike apparently started running to a house down the street after a friend called him over, likely causing the 65-pound cat to attack.

“I was just punching, trying to grab anything that I can, like a stick,” Pike said, according to WFAA News. “I did find a stick and I tried to get it in the eye but soon the stick snapped.”

As Gage rushed inside to alert his parents, the boy’s father, Ron Carlson, bolted out the door to help.

By the time Ron got to his son, the mountain lion had already dragged Pike away (by his head) into some nearby brush. Thankfully, the lion released Pike when Ron came running towards them.

“When I first picked him up, I could see the whole side of his face was open. There was blood all over him. His scalp was ripped open in several spots. It was something that no parent should ever see.”

The family immediately loaded Pike into their car and made a beeline to the nearest fire station. Paramedics with the Platte Canyon Fire Protection District transferred him to Swedish hospital where he had two surgeries and received dozens of stitches and staples to close his wounds.

Not long after his surgeries, Pike was right back to being his normal self, even joking about the terrifying encounter:

Pike’s eyelid may require one final surgery to repair damage suffered in the attack.

Pike and his family returned home to signs of support made by all of their neighbors welcoming them back, also recognizing this could have easily happened to any of their children.