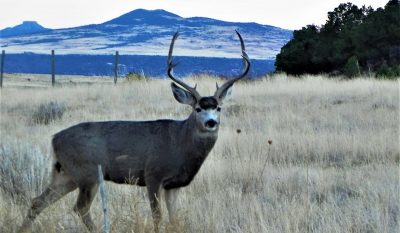 Autumn is here and with it comes the time-honored tradition of the hunt. Deer, whether it be whitetail or mule deer, is without a doubt the most popular big game species in North America. They can be found all across the US in every imaginable habitat from the highest mountains to lowland hills to American farmland and the hottest deserts.

I have been fortunate to have hunted deer since my teenage years, and even though my hunting ventures have taken me all over the US and abroad, I usually end up in my old stomping grounds of southeastern New Mexico every November to hunt desert mule deer. Hunting deer out west usually requires several good pieces of equipment if you want to be successful, especially for a “good” mule deer buck. Items such as quality binoculars and perhaps a spotting scope, obviously your favorite rifle that you have confidence in shooting out to several hundred yards, a good day pack (carrying water is a must) with essentials, and a solid pair of boots that are comfortable all day.

On the New Mexico deer hunt this year, chosen gear consisted of my Bergara B-14 Hunter model rifle in 6.5 Creedmoor was topped with a Nightforce SHV (Shooter-Hunter-Varminter) 3-10×42 scope, held in place by the American Defense Manufacturing quick release Recon base and rings that were rock solid. A Lucid Optics SC9 spotting scope that is crystal clear and invaluable for glassing far away canyons, yet small enough to carry in a cargo pocket. Sig Sauer Elite Hunter 130 grain was my ammo choice. It easily groups 1 MOA out of the Bergara at 100 yards. LOWA Zephyr GTX boots made traversing rocky terrain, full of cactus and the occasional rattlesnake, much easier.

The area I hunt in southeastern New Mexico is comprised of both public and private lands at an elevation of 3,500 to 4,000 feet. It is desert country full of rocks, cactus, mesquite, creosote, yucca, and the occasional juniper or cedar tree. The draws often contain sumac and mahogany which deer love for browse. Some canyons will contain cottonwood, hackberry, or black walnut trees.

Hunting this particular region of New Mexico for well over 30 years now I have of course developed good knowledge of how and where to hunt. I’ve seen many trophy type deer over the years, but seeing is not always a guarantee of a harvest success. Many years, I pass on small or average bucks even though I very much enjoy venison as table fare.

This year I had my sights on hunting an area where I’d seen a truly trophy mule deer during the 2018 season. My hunting style focuses on driving ranch two-track roads through rough country and lots of glassing. More often than not, once in the key hunt areas, I will take a pack and rifle and walk for the day, utilizing the wind and sun to my advantage along with a good pair of binoculars and/or a spotting scope. At each canyon or draw a thorough glassing of all likely areas is conducted. Many times, I spot deer before they have detected me which gives me a chance to take a better look. But as many readers know, those big bucks get big because they are smart. In most cases they have positioned themselves for a quick escape once a doe or small buck has sounded the alarm.

My 2019 hunt was no different in many ways. By the end of the first day I had seen seven or eight bucks, one of which was very nice but did not stay around long enough for me to even think about a shot. Other bucks, including a fork horn I pushed up at the range of about 20 yards, and enjoyed watching him bounce away as only mule deer do. The second morning I hunted an area on the outskirts of the main canyons, a tactic that’s paid off well in the past. I have learned over the years that mule deer and some very nice bucks would in fact bed and spend time in areas most hunters would overlook primarily because it just does not look like places deer would be. As it turned out I jumped a very nice buck out of a low draw that many folks would have never given a second glance. But the buck knew his escape route well and was gone over the ridge before I had the chance to take a good shot. At this point I’m sure as no surprise to many of you ardent deer hunters the score was, big bucks:  2, hunter:  0.

I continued hunting in a westerly direction and saw many more deer, including a nice six point that I considered for a moment, but knew that it was just frustrated thinking on my part and I didn’t need the meat that bad.  I ended up on a high point we have named “the perch” a couple of miles from where I started. Here I met up with my brother who agreed to rendezvous with the truck at that location where over the years, we’ve taken many bucks in the desert canyons below.

What is so ironic is that there are in fact times that all your skill, effort and years of experience in the end may or may not play a role in how things end up. That you have spent countless hours on the range zeroing and making shots at 500 yards and beyond, that your equipment is top notch and your legs are still strong enough to carry you miles and miles. Once in a blue moon the hunting gods just toss you a chance that seems too easy, making you think no, this is supposed to be way harder.

I sat and talked with my brother for ten minutes and then suggested he should pick me up at the bottom of the ridge that the old ranch road went down and I would walk a shallow draw to the west all the way to the bottom. Ironically, I had never chosen to walk that draw out in over 30 years of hunting this area. I left my brother at the truck and walked for no more than five minutes to the edge of the draw. There, I immediately spotted a nice buck bedded amongst mesquite at only 100 yards or so. He was facing away; the wind was in my favor. I dropped to kneeling to take the shot but realized I could not get a shot from a lowered position. Have you heard of tunnel vision? As I stood to take the shot off hand, I never saw the much bigger buck that was bedded only feet from the guy my eyes were fixated on. He had obviously seen me the whole time, watching the opposite way, my way. In a flash, they both jumped to make their exit. Time stood still as my rifle came to my shoulder, the buck appeared in the scope, the rifle fired as if on auto pilot. I never heard the shot, but the buck was down. No long stalk, no long shot, not even time to glass and spot the buck, it all happened in seconds.  I suppose many who have never hunted, who believe hunting is barbaric, will never understand or believe the emotion a true hunter feels when the kill is made. Its elation rolled up with a bit of sadness and much respect for the animal you have just taken, as it should be.

The buck was the best I have ever taken. Oh, he won’t make Boone and Crockett and that matters little to me. At 26 inches, he was not the widest I’ve ever taken either, but the rack is heavy and symmetrical with 13 points including double brow tines, and antlers darkened from rubbing velvet off on the creosote bushes. The buck had two scars along his nose, a testament to past battles.

I had taken the buck at about 125 yards running with an offhand shot in a shallow draw that was strewn with little more than mesquite and grass. I have no doubt he, along with his compadre, had used the mundane draw before to avoid hunters. But the hunt was fair and as the saying goes, “every now and then a blind hog finds an acorn.” Without a doubt the old buck had passed along his genes over the years and in all likelihood many of the deer I’ve seen on earlier hunts were his offspring. I will continue to hunt the same region for years to come, as long as my legs will carry me.

Now, after over 40 years of deer hunting, I will most likely never take a better buck.. but that is okay, all is as it should be.