Archery May Never Be The Same After Seeing This ‘Jorgbow’

OutdoorHub
Archery May Never Be The Same After Seeing This ‘Jorgbow’ 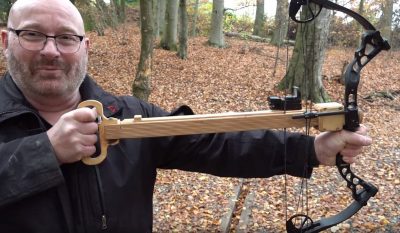 Well, it would appear German YouTuber Jörg Spave has done it again. He’s taken the typical design of a compound bow, and implemented a few changes to create a bow unlike anything you’ve ever seen before. It doesn’t have an official name, however I think ‘Jorgbow’ has a cool ring to it.

Archery may never be the same after this..

We’ve watched Joerg Spave attempt to reinvent the wheel several times on his YouTube channel, with designs such as a gatling-style crossbow and the full-auto crossbow. But this time, Joerg is applying his ‘mad scientist’ type thinking to a compound hunting bow, and he may actually be on to something here!

Seriously though, that is pretty dang cool. It seems like the type of design that could have been invented centuries ago, but somehow got lost in history.

I was pretty much sold on the idea when he drew the bow back for first time, but then I saw it was fired by a thumb release trigger, and now I’m all in on the ‘Jorgbow’! With no release or quiver needed, this might be the most clever innovation to the compound bow design we’ve seen yet.

Step on up, Matthews and Hoyt!

The post Archery May Never Be The Same After Seeing This ‘Jorgbow’ appeared first on OutdoorHub.