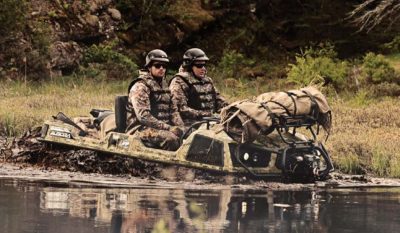 Have you ever caught yourself lost in the taillights of your buddy’s Side-by-Side as he tears down the trail, while you’re stuck in a quagmire of ‘skeg? It’s no fun. Take the road less traveled with ARGO XTVs.

Unless, of course, you’ve got an ARGO XTV, which can spare you the indignity of calling out for help by ensuring you’re not the one getting stuck in the first place. Setting themselves apart from a traditional ATV or side-by-side is ARGO’s calling card, as the company specializes in building rigs that are capable of tackling terrain that would cause many other off-road vehicles to turn tail. In fact, with their water fording capability, an ARGO XTV is considered a true amphibious vehicle, giving it all sorts of extra applications that Side-by-Sides simply can’t boast, and allowing them to plow through obstacles that would stymie traditional land-based crafts.

That’s great news for hunting and fishing enthusiasts, who can make use of the ARGO’s next-level utility to get set up in spots that were previously inaccessible by a motorized vehicle. The brand’s Frontier 600 model, for example, uses its V-Twin engine to shuttle power to all six of its wheels, producing massive amounts of ground traction and climbing ability that would make a mountain goat jealous. Meanwhile, a 1200-pound towing capacity means hunters can cart home some of the largest game.

Plus, thanks to a built-in bilge pump that comes standard, anglers can go straight from land to the water in an ARGO, negating the need to haul a boat just to get to one’s favorite fishing hole. Load capacity on the water is just under 400 pounds with a top speed of 3 MPH for the Frontier 600 6×6, which sure beats having to wrangle with two different modes of transport just to land that prize catch, while ARGO’s low center of gravity keeps things right-side up both on and off the water. Whether you’re looking to pick the perfect spot for your tree stand or duck blind, ARGO lets you determine where to set up, not the terrain (or your Side-by-Side’s limitations).

With a top land speed of 22 MPH on most models, you won’t win many drag races on your ARGO XTV. The drags you will win, however, are the ones where you’re hauling your buddy’s buried Side-by-Side free from the muck for the third time that day. ARGO truly turns the outdoors into the great outdoors, removing barriers and boundaries to help you get where you want to go without issue, even if those spots were previously inaccessible with your old vehicle. And if your ARGO XTV can’t remove the barrier, chances are it’ll clamber right over it. Because getting where others can’t can make all the difference between a great day of hunting or fishing and a frustrating one.

Right now, ARGO is offering the all new Frontier 600 6×6 for only $7,999 for a limited time. This six-wheel drive brute has nine inches of ground clearance, water fording ability, a receiver hitch ready to haul 1200 pounds, and an adventurous attitude. A winch and tough-looking brushguard are optional and for a few bucks more, you can even fit a set of tracks and turn this thing into a mini tank.

So when it comes to your next outdoor adventure, stop wasting those valuable daylight hours getting stuck in tricky terrain and start getting back to what’s truly important: enjoying all that the outdoors has to offer. This time, with no limits.

Visit ARGOXTV.com today to find a dealer near you.

This article is sponsored by ARGO