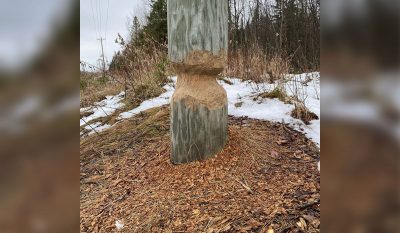 A seemingly confused beaver in Michigan caused a bit of a headache for an electric company last week, after treating a utility pole like a giant corn on the cob.

Cloverland Electric Cooperative posted a photo to their Facebook page showing the unusual occurrence that was discovered in Detour Village in Michigan’s Upper Peninsula. The company’s director of operations said this type of thing is pretty rare, and he hasn’t seen it happen in 30 years.

Though the process typically takes around 3-4 hours, a crew was able to quickly swap out the damaged pole with a brand new one.

This might be rare for the electric company, but it’s pretty standard behavior for a beaver. Beavers will often chew only part way through a tree trunk in fear of it toppling over on them. So, they chew a little and leave it hoping the winds will clean up after them. If it isn’t blown down, they will chew some more and wait again.

Hopefully Mr. Beaver found a different snack to gnaw on!

A message from Cloverland Electric Cooperative: If you see damaged utility poles (woodpeckers, snow plows or other culprits), please report the pole number or location to us at 1-800-562-4953.