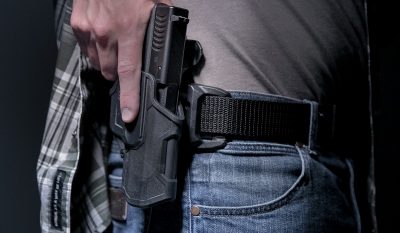 Not long ago, we announced a new Blackhawk duty holster with a brilliant Level 2 design, called the T-Series. As the name would imply, the selection didn’t end there. This month, the company unveiled the compact interpretation of that holster, the T-Series Level 2 Compact holster. I think this one will inspire a lot of people to toss their current holster aside.

Everything that’s right about the original T-Series holster’s retention design is cloned here. Releasing retention is effortless and integrated into the natural motion of the draw. Simply closing the thumb around the grip releases the internal catch to free the handgun. The release is set slightly off the body with molded flanges that brilliantly hold both the original and L2C model, just so, with room to insert a thumb while, on the L2C, the belt attachment also angles the grip slightly into the body, enhancing concealability. The thumb release channel is designed so that any size thumb can operate it with the same intuitive motion.

Blackhawk delivered more good ergonomics in sculpting out the body of the holster so that all but the fattest middle fingers won’t experience the bite that many Kydex holsters inflict.

Upgrades and accessories are all the rage today, and those are accommodated without added bulk. The tall XS Night Sights on my Glock 19 fit with room to spare in the L2C’s sight channel. There’s plenty of space for a red dot sight; most of the ejection port is even uncovered. Yet the trigger and trigger guard are secure under well-fitted glass-reinforced nylon (pssst, it looks a lot like Kydex, but with more distinct molding lines).

This holster will work well for range or concealment use, and is compliant with many agencies’ standards for a duty holster. The angle of carry can be customized for personal preference or better concealment. Those who carry for work should love this holster’s light weight and lower bulk for a Level 2 setup. It leaves lots of room for other gear on a belt.

The original T-Series is packaged with an adapter for strapping the holster onto chest-borne or similar rigs. The L2C comes with Blackhawk’s patented QDR, or Quick Dual Release clamp-style attachment, for fast-off installation or removal of the holster over belts ranging from 1.25 to 2.25 inches. Attached to the holster out of the box is a two-loop belt attachment, which upon close inspection is the source of the L2C’s tight-to-body profile. By making the forward-facing side of the attachment thicker, the grip naturally rests closer to the body.

Tactical appeal continues with the sound-dampening lining of T-Series holsters. And it’s matte black. Despite not taking up much space, Blackhawk managed to craft sporty lines and a subtle logo into the finished product.

Wearing this holster is a breeze. Its trim design leaves more room to navigate tight spaces, including sitting in a vehicle. With the L2C, I stand by my initial assertion after using the first T-Series model: this is a whole new class of Level 2 wear. With a tiny bit of practice, any delay in my draw imposed by releasing the retention lever is imperceptible. This is a safe holster that won’t get in the way during a good match—or a good gunfight.

This first run of L2C holsters are made for double-stack Glocks or Sig Sauer P320s. My Glock 17’s muzzle is still protected inside the L2C, and the 19 (both Gen 4) fits with the same secure retention. Strap-added Level 3 models are on the horizon. August and September should see the release of even more models, including one for compact and subcompact Glocks, some Kahr models, most of the Smith & Wesson M&P line, and more Sigs, with light-bearing options included. MSRP is $64.95.