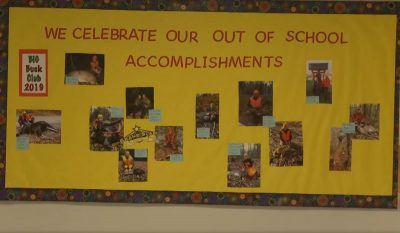 During an era with fewer and fewer hunters heading into the woods, an elementary school in a small Maine town is embracing its hunting traditions, and we are fully on board!

At Whitefield Elementary, students aren’t concerned about posting their hunting photos on social media because there’s a large bulletin board hanging in the hallways where kids can post photos of themselves with bear, moose, turkey and deer that they’ve harvested.

Students K-8 are all allowed to hang pictures on the board, which multiple faculty members claim has brought the community closer. Even the teachers get involved in the fun!

“I like the bulletin board,” says Caleb Bishop. “If we kill a big deer or or a big bear, we’re able to talk around to our friends.”

There is one stipulation. Due to the school’s ‘zero weapons’ policy, photos hung on the board cannot feature any firearms, bows or other weapons of any kind.

“We started our bulletin board a few years ago and kids were posing with guns and their game, physical education teacher Jamie Simpson told News Center Maine. “We have a no-weapons policy at school. So the kids were also taking their photos without their weapons so they could still have their photos posted.”

And there’s some pretty impressive hunters walking the halls at Whitefield Elementary! In fact, two seventh graders have already accomplished grand slams – which means they harvested a deer, bear, turkey and a moose IN THE SAME YEAR.

Olivia Brann is the latest to complete the impressive feat, with Caleb being the only other seventh grader to do it.

“A lot of people think because I’m very ballet and I like to dress up and stuff in dancing when I say I’m a hunter, people are like ‘Wow!’” she said.

Students also compete in a contest each year for the hunter with the biggest buck. Last year, Olivia’s nine-year-old sister Cassidy won the contest with a massive ten-point buck.

I just wish my school would have held a contest like this when I was a youngster!

Hear more from the students in the video below: