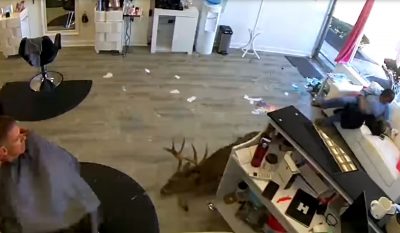 A chill afternoon at a New York hair salon was briefly interrupted by a giant whitetail buck who presumably wanted a fresh hairdo before the rut starts next month.

Customers inside Long Island’s Be.you.tiful Hair Salon were completely caught off guard when – what I counted – an eight-point buck comes smashing through the entrance. Security footage from inside the salon shows a woman trimming a man’s hair while another customer waits on a couch at the front of the shop. The deer leaps right through the glass window of the salon, nearly landing in the lap of the seated woman, and I can only imagine what turned out of that man’s haircut after.

Meanwhile, the man getting his haircut – still bibbed and all – stands up and acts like this isn’t the first time his haircut has been halted by a deer crashing through the window. But just when he moves to the back of the shop to try and get a handle on the situation, the monster buck turns around and heads for the door.

And instead of jumping through the deer-sized hole now at the front of the store, the deer rams the front door with his huge rack and splits.

Here’s to hoping the hair salon around the corner takes walk-ins..