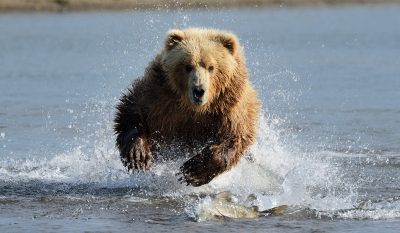 The U.S. Fish and Wildlife Service (USFWS) announced at the end of last month they will comply with a “court-ordered relisting” of grizzly bears to the Endangered Species List.

In 2017, the Fish and Wildlife Service delisted Yellowstone grizzlies and wisely handed over the responsibilities of managing them to states where the animal thrives, such as Montana, Wyoming and Idaho – where an extensively thought out grizzly hunting season was cancelled at the last minute after a handful of anti-hunting organizations argued the act of removing grizzlies from the Endangered Species List was “premature.”

Wyoming Congresswoman and House GOP Conference Chair Liz Cheney (R-WY) shared strong remarks after the USFWS was strong armed by a court-order to revise the List of Endangered and Threatened Wildlife under the Endangered Species Act to relist grizzly bears in the Greater Yellowstone Ecosystem:

“The court-ordered relisting of the grizzly was not based on science or facts, but was rather the result of excessive litigation pursued by radical environmentalists intent on destroying our Western way of life. The thriving grizzly population within the Greater Yellowstone Ecosystem should be celebrated as a conservation success, with Wyoming investing significant resources in grizzly bear recovery and management since 2003.”

“The ruling that forced today’s action was both needless and harmful to the ecosystem, which is why I introduced legislation earlier this year to reinstate the original, science-based decision by the U.S. Fish and Wildlife Service to delist the grizzly and prevent future court action on the delisting, returning management of the grizzly back to the state where it belongs. I will continue working with my colleagues in Congress and the experts in Wyoming to ensure proper management of the wildlife in our state and prevent further federal overreach into our daily lives.”

The debate remains a hot-button topic between hunters and animal rights activists. One side is absolutely adamant that grizzly bear populations have not rebounded adequately, yet it seems bear and human encounters continue to rise. What are your thoughts?