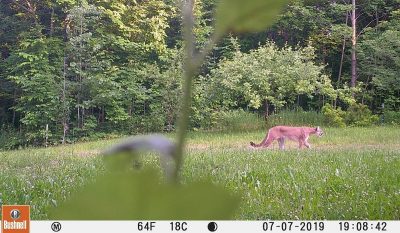 A report of a cougar in Northern Michigan has been officially confirmed by the Michigan DNR. This Michigan catamount sighting is the state’s 39th report since 2008.

The large cat was captured in a photograph on a landowner’s trail camera in Gogebic County during daylight hours in the far western portion of the Upper Peninsula, according to the DNR.

“This is very close to where a cougar was documented on a Deer Movement Study trail camera last year,” said Cody Norton, a large carnivore specialist with the Bear and Wolf Program of the Michigan Department of Natural Resources.

Although this is the 39th confirmed cougar sighting in Michigan, all but one have been in the Upper Peninsula. Officials with the DNR admitted the sightings could very well be the same cougar, emphasizing there’s “not necessarily 39 individual animals.”

Additionally, officials have stated there is “still no conclusive evidence of a Michigan breeding population of mountain lions.”

Cougars were originally native to Michigan, but were wiped out from Michigan around the early 1900s. The last known wild cougar legally taken in the state occurred in 1906 near Newberry. There have been periodic confirmations of cougar sightings since that time, and one illegal harvest in the Upper Peninsula. Over the past few years, numerous cougar sighting reports have been received from various locations in Michigan. This situation is not unique to Michigan, but has been occurring in many other mid-western and eastern states as young males disperse from core range in the western United States.

What should you do if you run into a Michigan catamount?

• Face the animal head on. It’s important not to act submissive. Stand tall, wave your arms and speak in a loud voice.
• Never (I repeat, NEVER) run from a cougar or any other large carnivore for that matter. If children are present, pick them up so they cannot run.
• Do not crouch and get on all fours. Hoping the animal doesn’t see you will not work on a cat. They have excellent eyesight and are looking for an easy kill. Show that you aren’t going down without a fight and they will likely back down.
• If attacked, fight back with whatever is available. DO NOT play dead.
• Report the encounter to local authorities and the DNR as soon as possible.