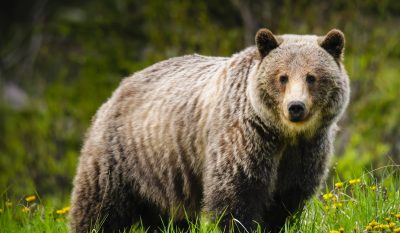 A Canadian man who was mountain biking through a remote area of British Columbia was viciously attacked by a grizzly bear, and only lived to tell the story thanks to a small pocket knife with a two-inch blade.

According to BBC, Colin Dowler was scouting potential hiking routes on Mount Doogie Dowler – a mountain which sits roughly 200 miles north of Vancouver and was reportedly named after his grandfather – when he ran into the bear on July 29.

As the report goes, Dowler watched the bear for a brief amount of time, hoping it would wander off into the woods and avoid human contact. Then it turned towards him.

With the bear closing in on him, Dowler reacted quickly, getting behind his bike and grabbing one of his hiking poles to defend himself. A fight with the big grizz was inevitable at this point.

Dowler did everything he could to keep his bike between himself and the bear, but these large animals are shiftier than you might imagine. With the bear only a few feet away, it made a couple quick maneuvers and somehow ended up behind Dowler. So he gave the bear a firm jab with the hiking pole, which merely led to a brief tug-of-war.

The bear remained persistent, and kept coming with “methodical, heavy swats” which were only getting heavier and stronger as the attack progressed. In what can only be seen as a last ditch effort, Dowler picked up his bike and threw it at the grizzly.

Now, with nothing stopping it, the bear moved in to finish Dowler off. It bit deep into his abdomen just below his ribs, and dragged him away to a ditch about 50 feet from where the attack started.

“It was so much pain and weirdness, I could feel the hot blood,” he recalled. “I’m being rag-dolled, suspended by my flank by a bear carrying me.”

The bear began taking bites out of Dowler’s legs, gnawing on his thighs and scraping bone. He tried gouging the bear’s eyes, and even tried playing dead. But nothing was stopping the bear.

With the enormous animal on top of him, Dowler says he somehow, with both hands, was able to pull underneath the bear to grab a small knife out of his pocket.

“I grabbed the knife out and opened it and put it in [my] hand and stabbed the bear in the neck.”

“It let go of me immediately. It was bleeding quite badly,” he added. “I wasn’t really sure if it was dying faster than I was.”

Miraculously, Dowler managed to drag himself – chewed up leg and all – over to his mountain bike, and started pedaling.

“I was thinking I’m not going to make it,” he said. “It was pretty freaking scary.”

A little way down the road, Dowler made it to a remote worksite where he collapsed and began shouting for help. As luck would have it, five workers walked outside and immediately started administering first aid.

“When we saw him, it was shocking and pretty unnerving at first,” said Vittorio Giannandrea, a cook at the Ramsay Arm worksite.

Dowler is now recovering at Vancouver General Hospital, however, CBC reports his injuries are not life threatening.

In regards to the grizzly bear responsible, the provincial Conservation Officer Service confirmed four officers went into the area, located the bear and euthanized it.

The post Mountain Biker Stabs Grizzly Bear in the Neck With a Pocket Knife During Vicious Attack appeared first on OutdoorHub.