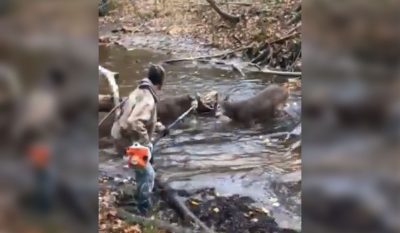 When a Michigan man spotted two bucks apparently locked together in a field in Kent County, he quickly got on the phone with a neighbor and formulated a plan.

Insurance agent Mark Johnson was the one who originally saw the deer struggling in a field and called for help, the Detroit Free Press reports. Johnson, who is a deer hunter himself, knew if something wasn’t done soon, the two bucks would find themselves in a dire situation. So he phoned his buddy, Brad Lyons, and said “I think we got two bucks locked up, I think we need to do something.”

But when Mark, Brad and a group of helpers showed up to assist the deer, they didn’t want anything to do with them.

Eventually, the exhausted bucks ended up in the near freezing waters of Pratt Lake Creek still completely tangled and locked in each other’s antlers. This was likely the best (and possibly last) opportunity the gentlemen would get to help the deer before this situation took a turn for the worse. So, Brad worked quickly, but carefully.

He stepped into the cold water with a gas-powered tree limb saw and waited for his moment to step in and cut the deer free. The bucks struggled in the water for a minute or two and then crashed, landing on their backs allowing Brad to go to work.

Watch how it all ends in the Facebook video below: