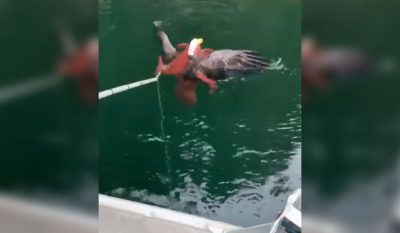 A group of Canadian fish farmers captured a once in a lifetime encounter off Canada’s West Coast, when they discovered a large octopus somehow managed to latch onto a bald eagle and was now trying to drown the bird.

The fish farmers were on a boat near Quatsino, B.C. when they suddenly began hearing splashing and screeches, farm manager John Ilett stated in the Victoria Times Colonist. They drifted towards where they heard the sounds coming from, and then spotted the two strange foes struggling in the water at a salmon-farming operation owned by Mowi Canada West.

The company shared the wild video footage on Facebook Wednesday:

Ilett said he and the rest of the crew thought for a moment whether or not they should let nature take its course, but as you just saw they ultimately decided to step in and lend a helping hand to the eagle.

“The octopus was trying to drown the eagle, and we couldn’t just stand there,” he told the publication.

You can hear several members of the crew marvel at the size of the octopus right before it disappears into the depths. The camera then pans over to show one last glimpse of the eagle while it attempts to recover from the dramatic experience. The caption on Mowi Canada West’s video states the eagle recovered on a branch nearby for roughly 10 minutes, and then flew away as if nothing happened.

What would you have done in this scenario? Would you just let nature be, or would you intervene and rescue the eagle?