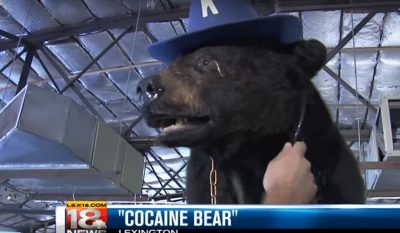 Okay, now this story is pretty bizarre – even for us.. If you aren’t familiar with the story of Andrew Thornton II and Kentucky’s Cocaine Bear, we’ll try to give you a quick run-down.

Andrew was an ordinary farm kid from Kentucky. He got into trouble as a youngster, and eventually found himself in a military academy. After that, he became a Lexington narcotics police officer. We’ll see the irony of this later on. . .

Once he served time busting people on drug charges, he then became a practicing Lexington lawyer. Some even believe Thornton strategically planned his time on the “right side of the law” to help bridge connections with other shady characters across the globe.

According to Kentucky for Kentucky, in 1981, Thornton had been accused of stealing weapons from a California naval base, and conspiring to smuggle half a ton of marijuana into the U.S.

He was somehow able to evade those felony charges though, and got off only having to pay a small fine and spend 6 months in prison, on top of a suspended license.

You’re probably wondering by now, why we’re talking about this man and his trouble making ways, but bare with us, because this story is about to get turned on it’s head. . .

See, in 1985, Thornton had stepped up his criminal activities in a major way, and had been making regular trips to Columbia to smuggle cocaine into the U.S.

During one of those runs, Thornton reportedly had a parachuting accident, and fell to his death in some guy’s yard in Knoxville, Tennessee. Apparently when they found his body, he had on night vision goggles, a bulletproof vest and Gucci loafers on his feet. He also had $4500 in cash casually jammed in his pockets.

Oh yeah, and there was also a duffel bag with roughly 75 pounds of cocaine in it.

This is where things get weird. . .

About three months after Thornton’s death, the body of a black bear was discovered in Georgia’s Chattahoochee National Forest.

Kentucky for Kentucky reports this is how the story appeared in the New York Times:

Cocaine and a Dead Bear

BLUE RIDGE, Ga., Dec. 22 (UPI) — A 175-pound black bear apparently died of an overdose of cocaine after discovering a batch of the drug, the Georgia Bureau of Investigation said today. The cocaine was apparently dropped from a plane piloted by Andrew Thornton, a convicted drug smuggler who died Sept. 11 in Knoxville, Tenn., because he was carrying too heavy a load while parachuting. The bureau said the bear was found Friday in northern Georgia among 40 opened plastic containers with traces of cocaine.

You don’t need to be an expert to know that’s a lot of blow for a bear to get it’s paws on. Just imagine how this went down; The bear was probably rummaging through the forest feasting on berries and bugs, when suddenly it was raging through the trees, and tripping off Columbian star dust.

Ky for Ky did some further poking around for this story, and we’re so glad that they did.

Eventually they got in contact with the actual medical examiner (who’s now retired) who performed the bear’s necropsy and the memory of the cocaine bear was still fresh in his mind.

“Its stomach was literally packed to the brim with cocaine. There isn’t a mammal on the planet that could survive that. Cerebral hemorrhaging, respiratory failure, hyperthermia, renal failure, heart failure, stroke. You name it, that bear had it.”

The bear’s body was apparently in good shape though, so the examiner thought it would be a waste to have it cremated. He made some phone calls, had it taxidermised by a friend, and then gifted the animal to the Chattahoochee River National Recreation Area.

Cocaine bear sat on display in the visitor center for a while, before mysteriously disappearing along with a handful of other artifacts.

The stuffed cocaine bear switched hands a few more times after that – including being sold to country music legend Waylon Jennings – before finally settling in the Kentucky Fun Mall, located in northern Lexington.

Ketucky’s Cocaine Bear, aka Pablo Escobear, has become a sort of centerpiece, or a mascot after it’s bizarre journey to the Bluegrass State.