The micro-compact striker-fired pistol market just received its latest contender! Joining the ranks of Glock, SIG Sauer, and Springfield, the new Smith & Wesson M&P Shield Plus is the latest double-stack 9mm micro-compact pistol to put its name in the ring. Although Smith & Wesson is a little bit late to the game, I was more than excited when they sent me out one for testing and review as I have been impatiently anticipating the release of this pistol since the introduction of the M&P Shield 9EZ back in 2019. So is the M&P Shield Plus going to sink or swim in the waters of the micro-compact 9mm carry pistol arena? Let’s find out. 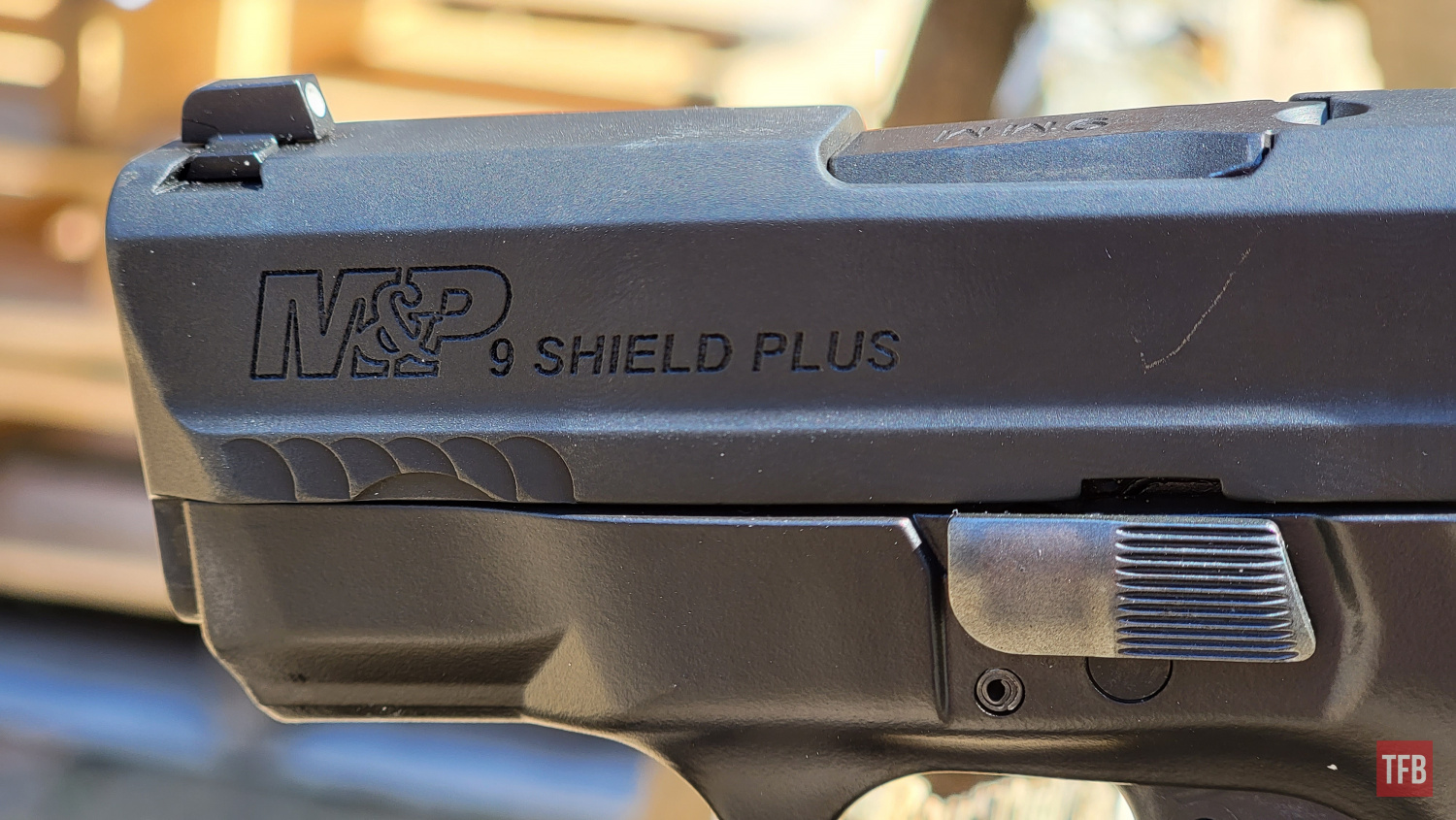 Introduced in 2002 and quickly adopted by myself as soon as I was able to gain my concealed carry license, the Smith & Wesson M&P Shield was an 8-round single-stack polymer pistol that was not only reliable and concealable but extremely inexpensive. At the time, this was one of the biggest selling points for me after just exiting college. The pistol was nonetheless a huge success in the concealed carry pistol market which led to improvements over the years. I purchased mine on sale for about $200.

In 2017, Smith & Wesson introduced the Shield 2.0 which received a new grip texture and slide serrations and an improved trigger. Now in 2021, we finally have the 13+1 capacity Shield Plus. So what features does it bring to the table beside the increased magazine capacity and what exactly has changed about the pistol compared to its earlier iterations? 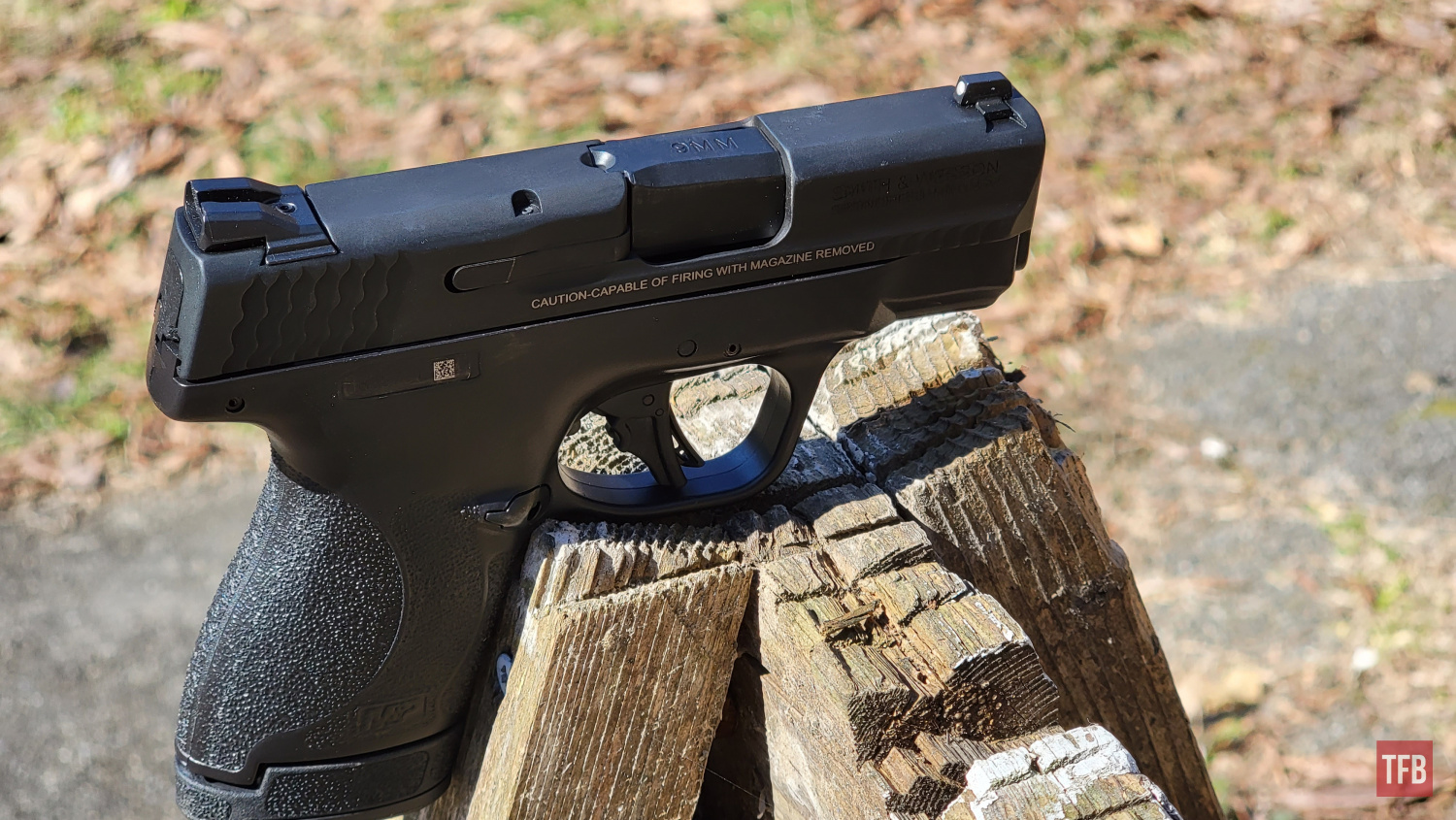 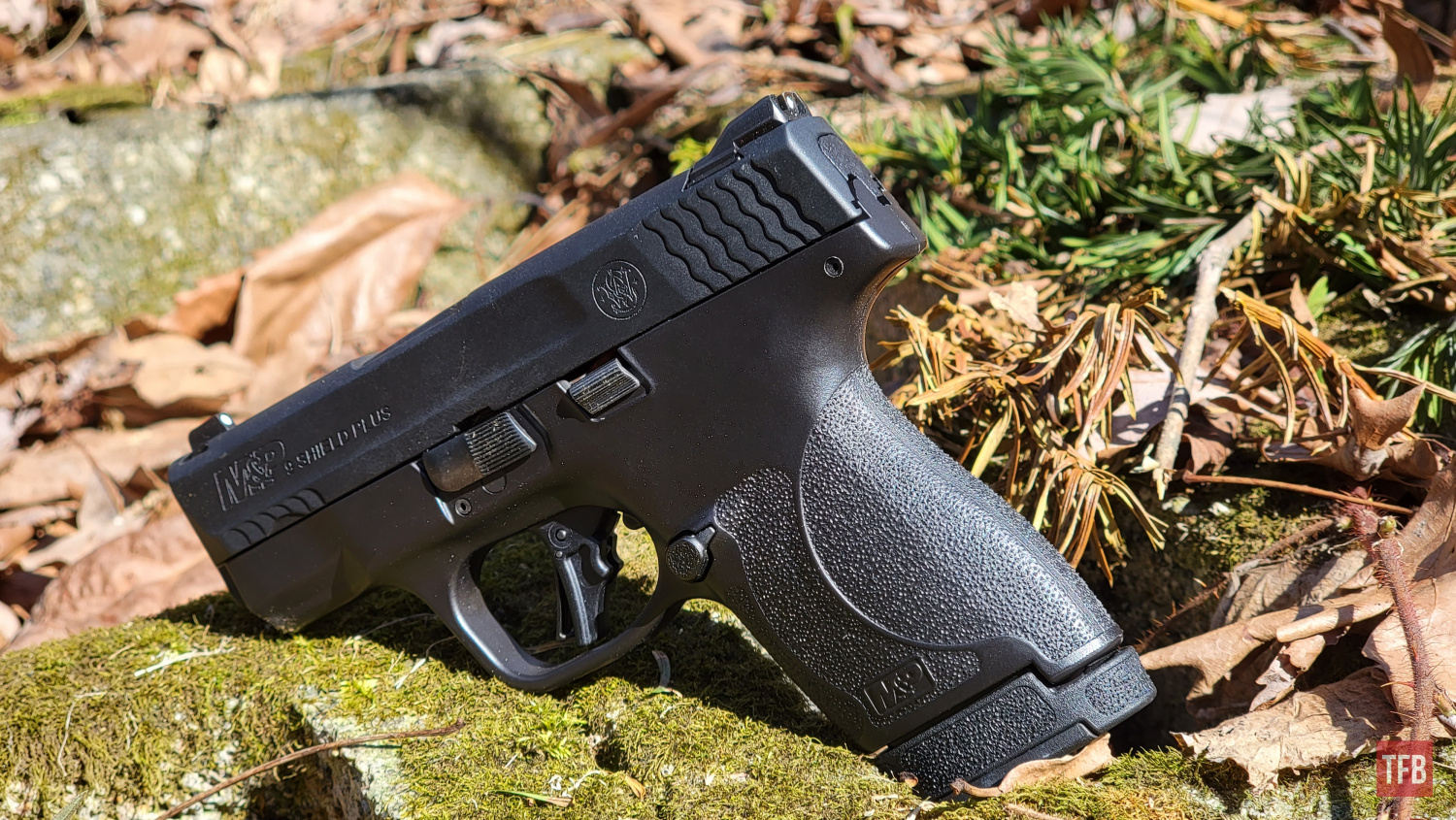 The price alone makes the Shield Plus the most inexpensive option in the double-stack 9mm micro-compact market to date. As with the first generation shield you can probably expect these pistols to have a much lower street price than their advertised MSRP. When taking into consideration all of the specifications of the Shield Plus, you pretty much are getting a slightly larger slightly bigger capacity, Smith & Wesson Shield. However, there are a few more features that separate the Shield Plus from your Standard Shield and Shield 2.0 pistols. 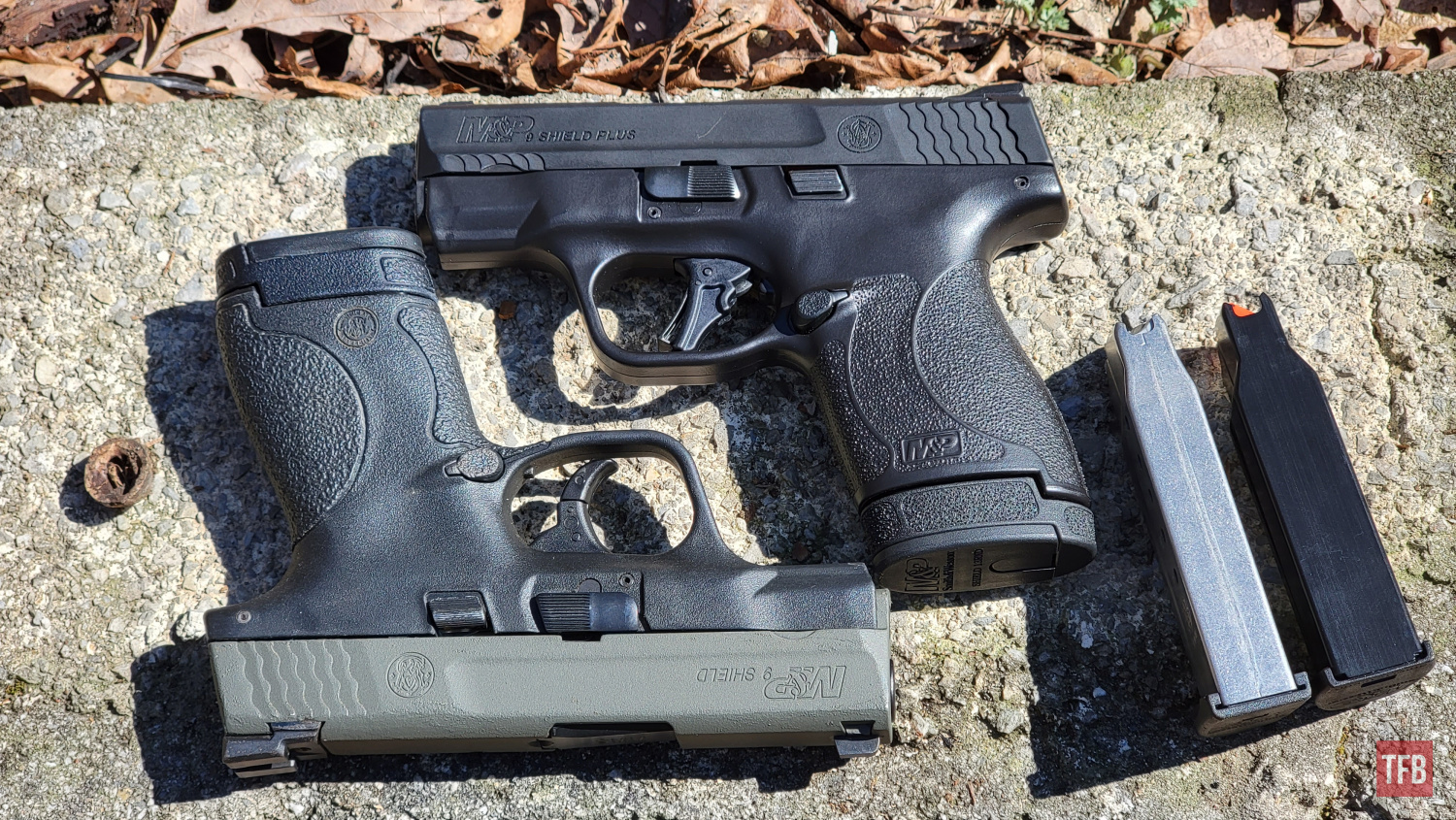 The first thing most of you will notice about the new appearance is the trigger – the trigger looks like something you’d normally find on an aftermarket modified pistol or something out of the Smith & Wesson Performance Center line of pistols. The improved trigger is purportedly the same mechanism as the previous Smith & Wesson shield except with the notable difference of having a semi-flat trigger shoe in place of the curved one. 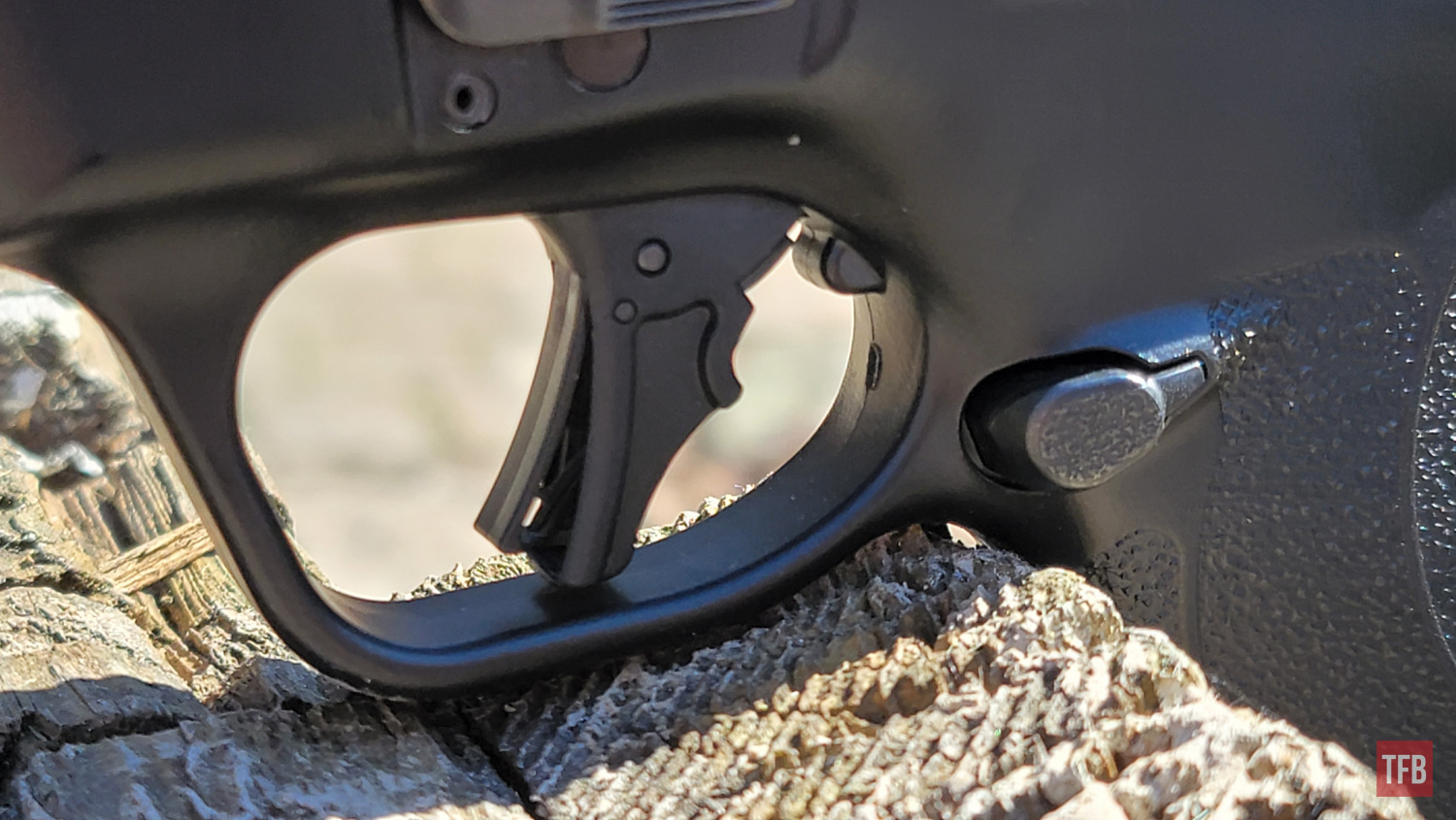 I’ve always appreciated the take-up, break and reset of Smith & Wesson’s striker-fired triggers and the added bonus of an almost flat trigger shoe makes this probably the best out-of-the-box striker-fired trigger for me. Before my first trip to the range with the pistol, I was getting an average of about 3lbs on my trigger scale for the M&P Shield Plus and an average of about 3 lbs 14 oz for the standard Shield. If the internal mechanisms are all the same, then the lighter trigger pull can most likely be attributed to the new geometry of the trigger shoe.

Even though the trigger is a bit on the lighter side, I still feel safe enough to carry it both inside of a hard polymer holster or my preferred method of carrying – belly band. 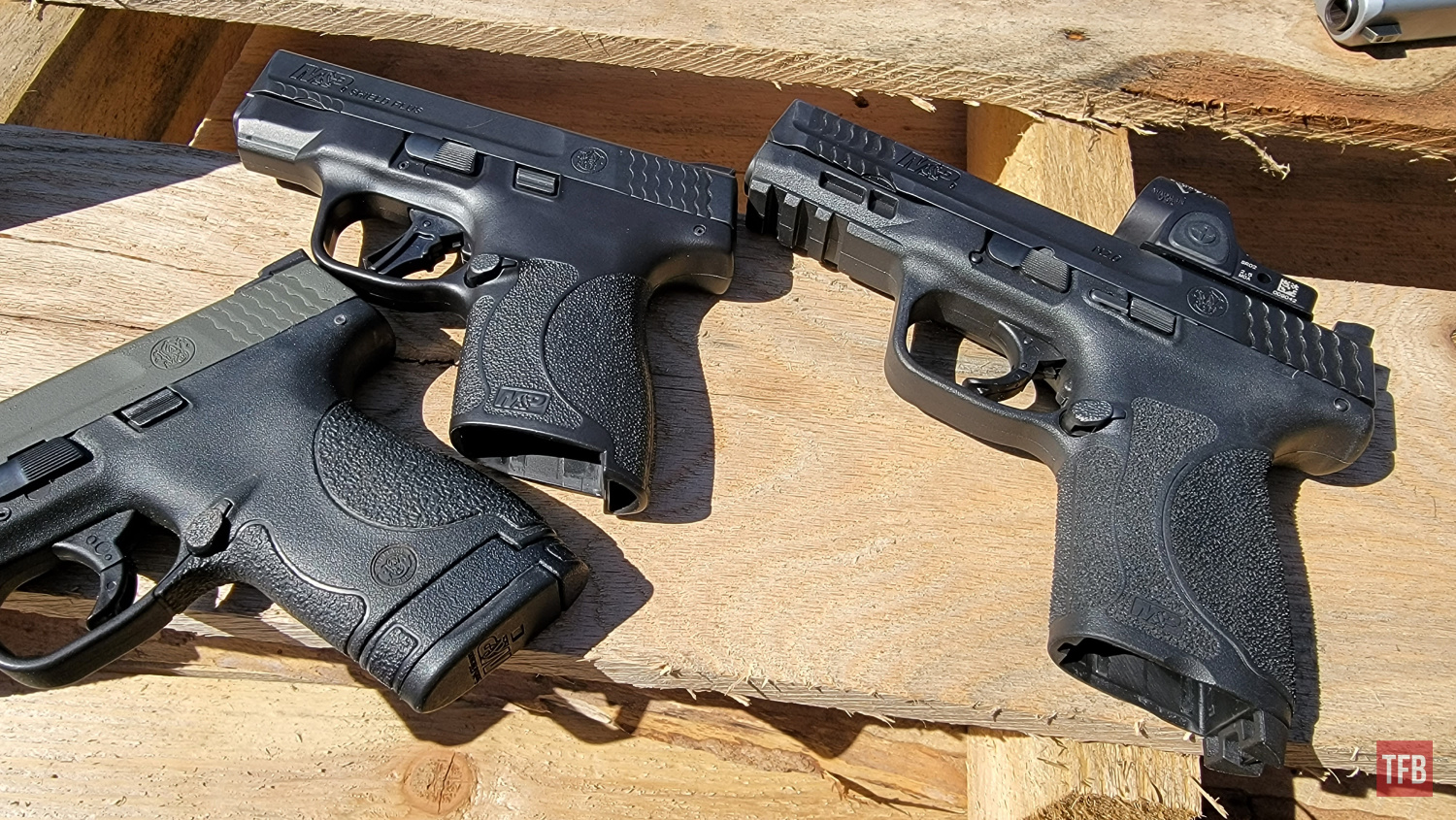 If you were to take a strong look at the standard Shield or Shield 2.0 and compare it side by side with the Shield Plus, you’d notice that the sheen of the frame is slightly different. This is because Smith & Wesson opted to have the frame coated in matte black Cerakote in order to more evenly blend the color of the Armornite finished slide with the rest of the frame. 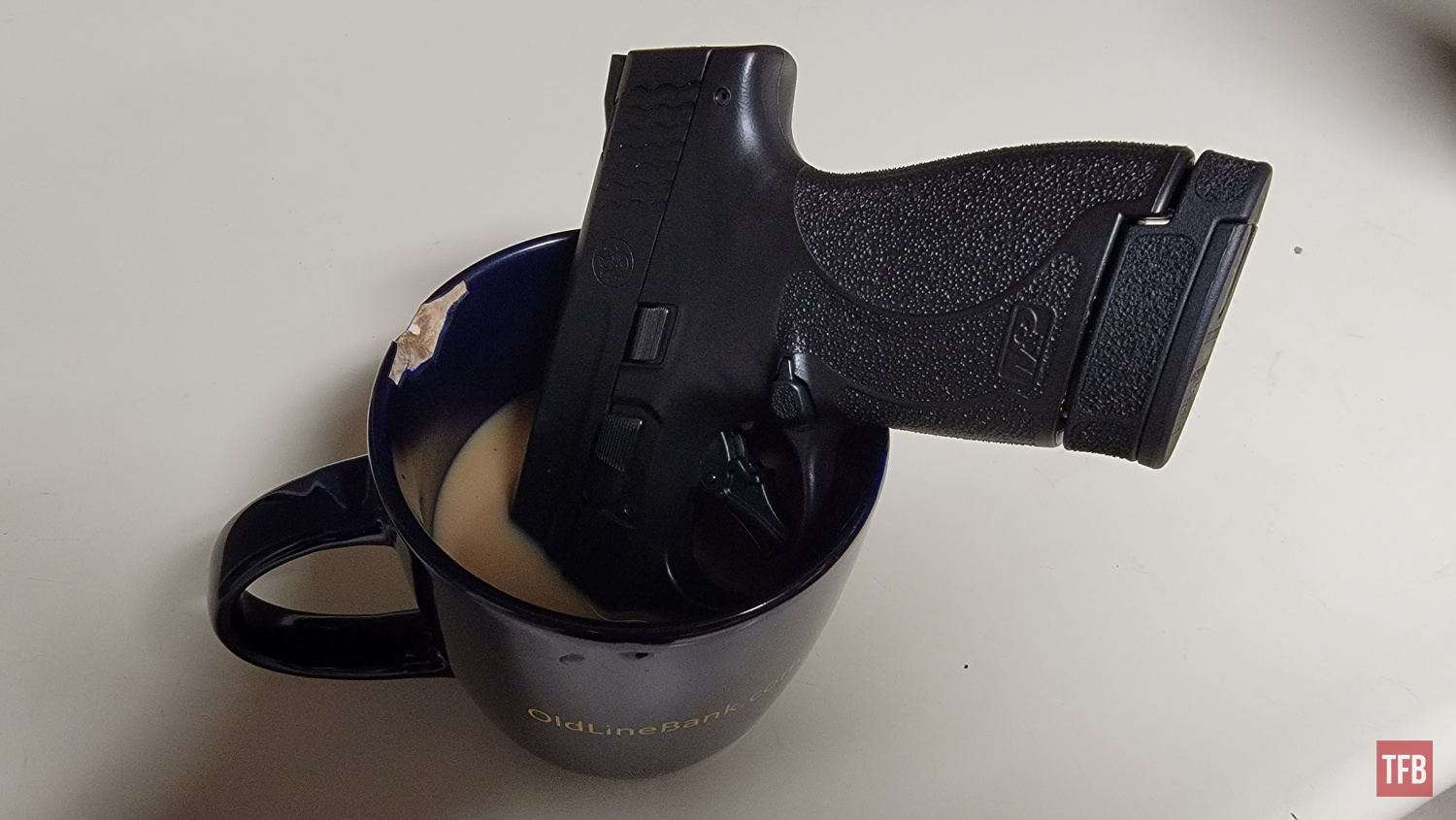 On that note, you’ll probably notice that my old shield has a drastically different colored gray slide compared to standard models. That’s because through years of carrying I managed to sweat through Smith & Wessons Armornite coating. When I first received the Shield Plus, somehow the pistol inexplicably ended up in a cup of coffee (which is mildly acidic) before I even had a chance to shoot the gun. Despite this dip in mild caffeine flavored acid and being carried around for a straight week for 10+ hours a day the pistol’s coating managed to show no signs of giving way. 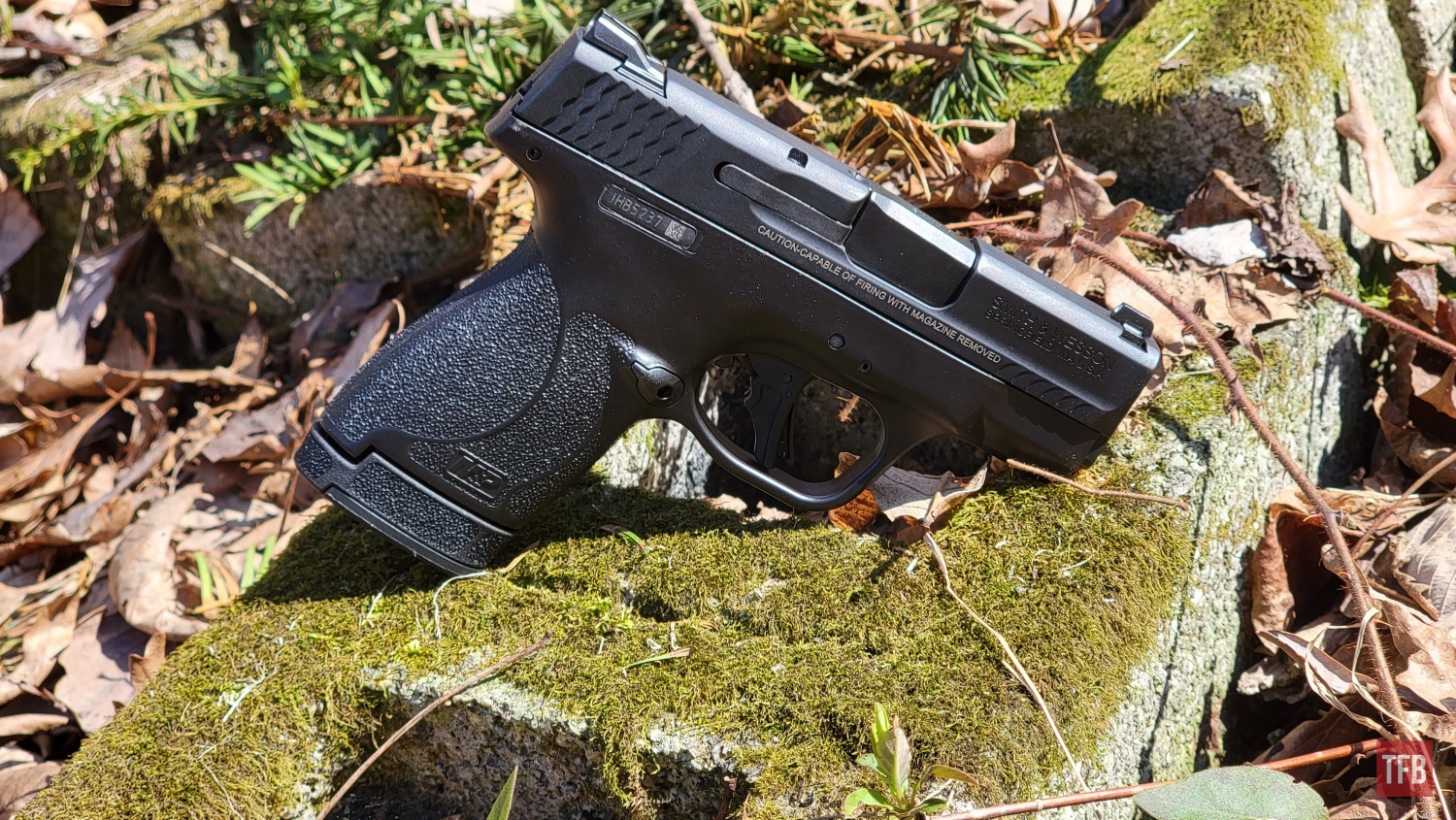 The pistol also features a much less aggressive grip texturing than the Shield 2.0 which was extremely abrasive and would give you a nasty rash throughout a day of carrying. While Smith & Wesson didn’t scale the texture back all the way into the Shield 1.0 age, they did reduce the aggressiveness just enough to make it not painful to carry around. This is a huge plus in my book and really makes the pistol that much better to carry and shoot.

Smith & Wesson didn’t have any copies of the optics-ready version of the pistol available to send out ahead of release but they did tell TFB that they would be coming out with RMSc pattern optics cut. In addition, they should have a couple different variations from their Performance Center line which will be completely revealed at a later date. The Performance Center pistols should (I would assume) feature all the improvements you’ve come to expect from the upgraded line of pistols including optics cuts, ported barrels, fiber optic sights, and lightning cut slides. 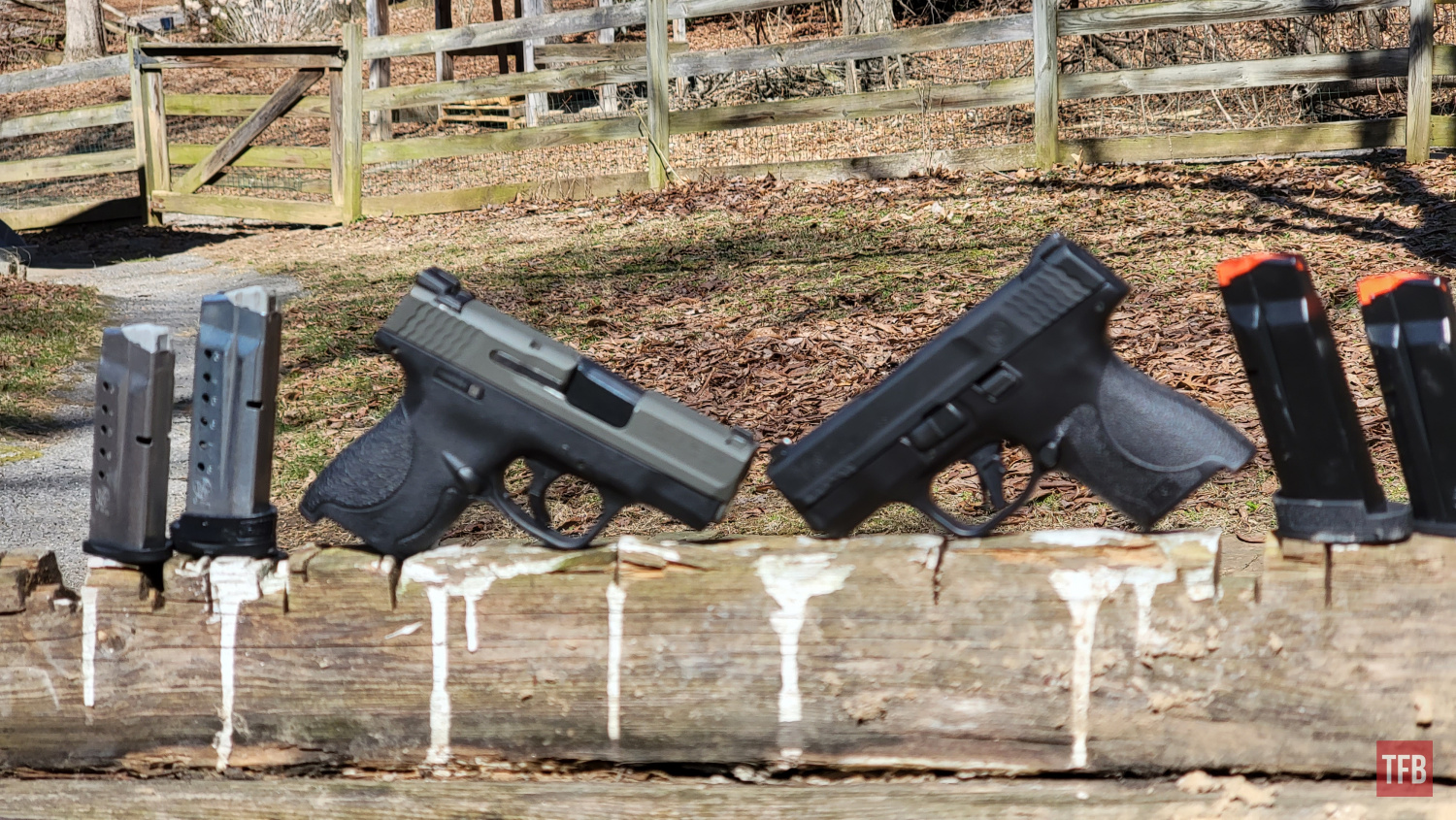 I hope that the new mounting plates included for the Shield Plus will be made out of metal instead of the plastic they normally give with their other pistols. I don’t actually know if the adapter plate material matters as far as durability but it always struck me as odd to have plastic included as part of a force-bearing piece of a pistol.

Despite the numerous improvements made to the Shield Plus, Smith & Wesson thoughtfully and rightfully (in my opinion) kept much of the old features. Without being told this, I attempted to fit my Shield Plus into my Shield 1.0 holster and to my surprise, it fit perfectly. The Shield Plus will also be compatible with all previous generations of sights for the pistol. 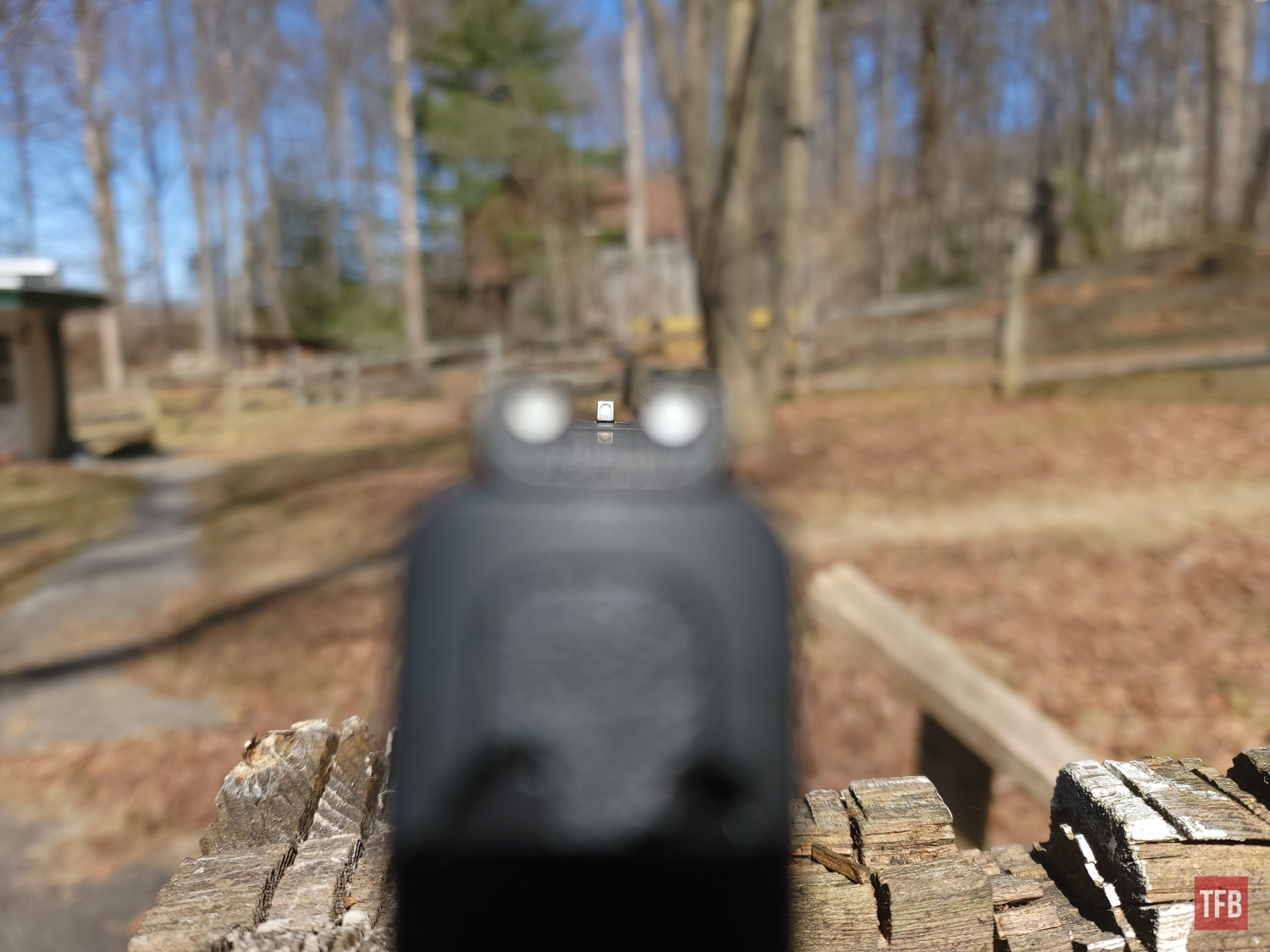 This backward compatibility is a great feature in and of itself especially for people who have already heavily invested in the previous versions of the shield. One thing I might end up doing if I purchase a Shield Plus would be to swap out the great 3-dot white sights with the M&P tritium night sights. So right out of the box, you have sight and holster availability in the aftermarket department without needing to wait for the industry to catch up to the shock of a new pistol on the market.

In the Field with the Shield Plus

Like I said earlier, I only had this pistol for a short amount of time – about 10 days before publishing this review. In that time I was only able to make a couple of range trips and altogether I put about 500 or so rounds through the Shield Plus. So how does the Shield Plus carry and how does it shoot? In short: pretty damn well. The Shield design has always been an extremely concealable piece even for a relatively short guy. 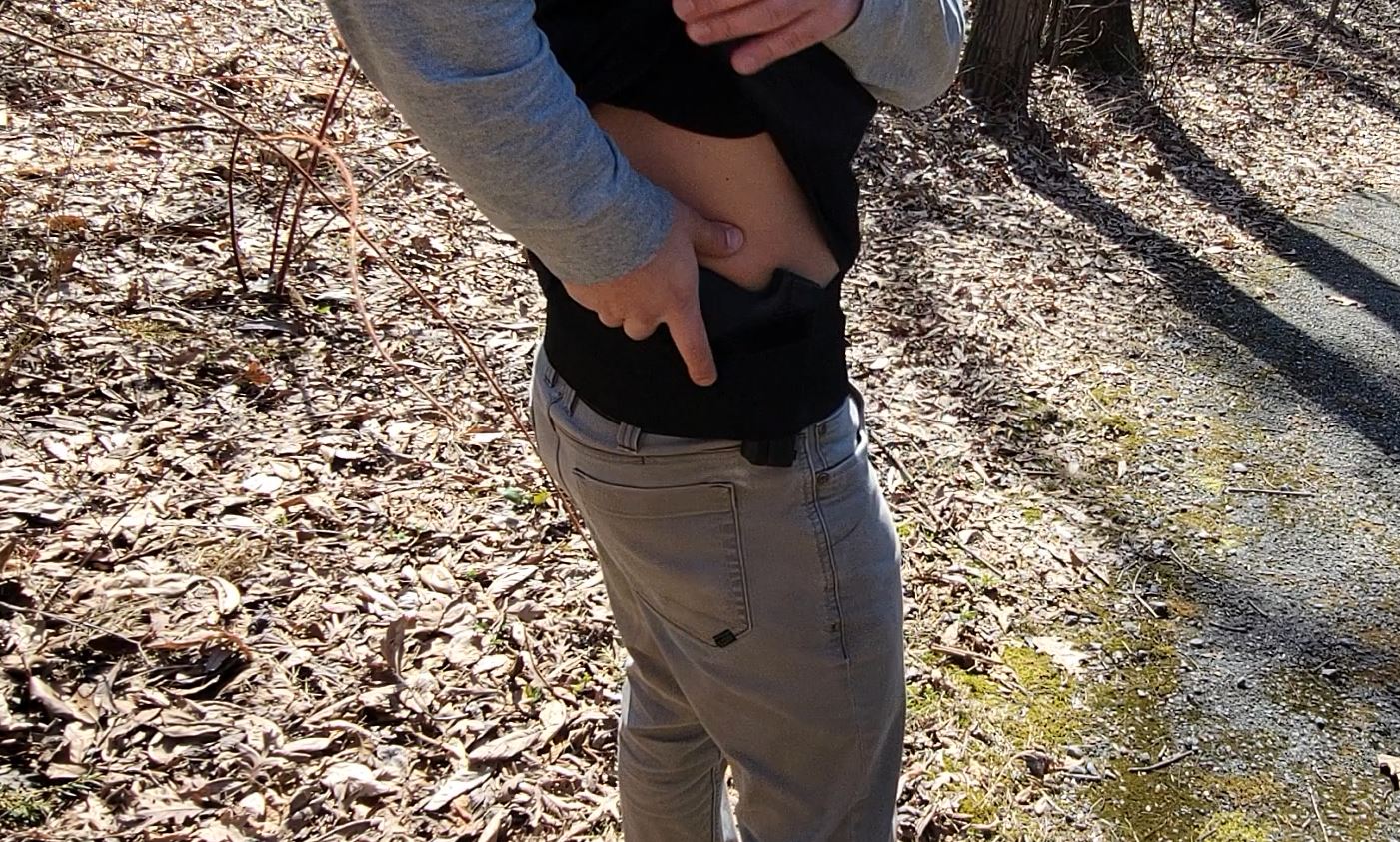 The Shield Plus carries almost the exact same footprint (and is slightly lighter) than its previous iterations and I don’t notice the slightly wider grip at all. The hardest dimension to conceal of any pistol is always going to be the butt of the gun and this is what is really great about the Shield Plus design – it’s not any longer even with an extra 5 rounds of capacity. The new Mec-Gar made magazines are just slightly wider than the vanilla Shield magazines and also feature a smooth blacked-out coating which makes magazine changes feel much smoother.

I put 550 rounds total through the pistol throughout the week mostly shooting a mix of 115-grain ball and 135-grain TC polymer-coated ammunition – no flaws there. In addition to that, I also tested the Shield Plus with a full 50 round box of Federal 147 grain HST and a full box of Liberty Civil Defense 50 grain +P ammunition. As far as I can tell, the Shield Plus is functionally identical to the two previous versions of the shield and collectively I have well over 3,000 rounds through all versions of the Shield combined with next to no non-ammunition-related malfunctions.

The biggest difference comes with the shootability of the Shield Plus which is a superb experience when compared with the old version of the shield. The slight palm swell in combination with the less aggressive grip tape texture fits in my hands perfectly and is just right in terms of grip texture and comfort. In addition, the improved trigger geometry means better accuracy (for me at least). With the standard Shield, I tend to pull shots a little low and to the left (it gets even worse without the pinky extension) but with the Shield Plus and the improved trigger design, this problem is drastically reduced. 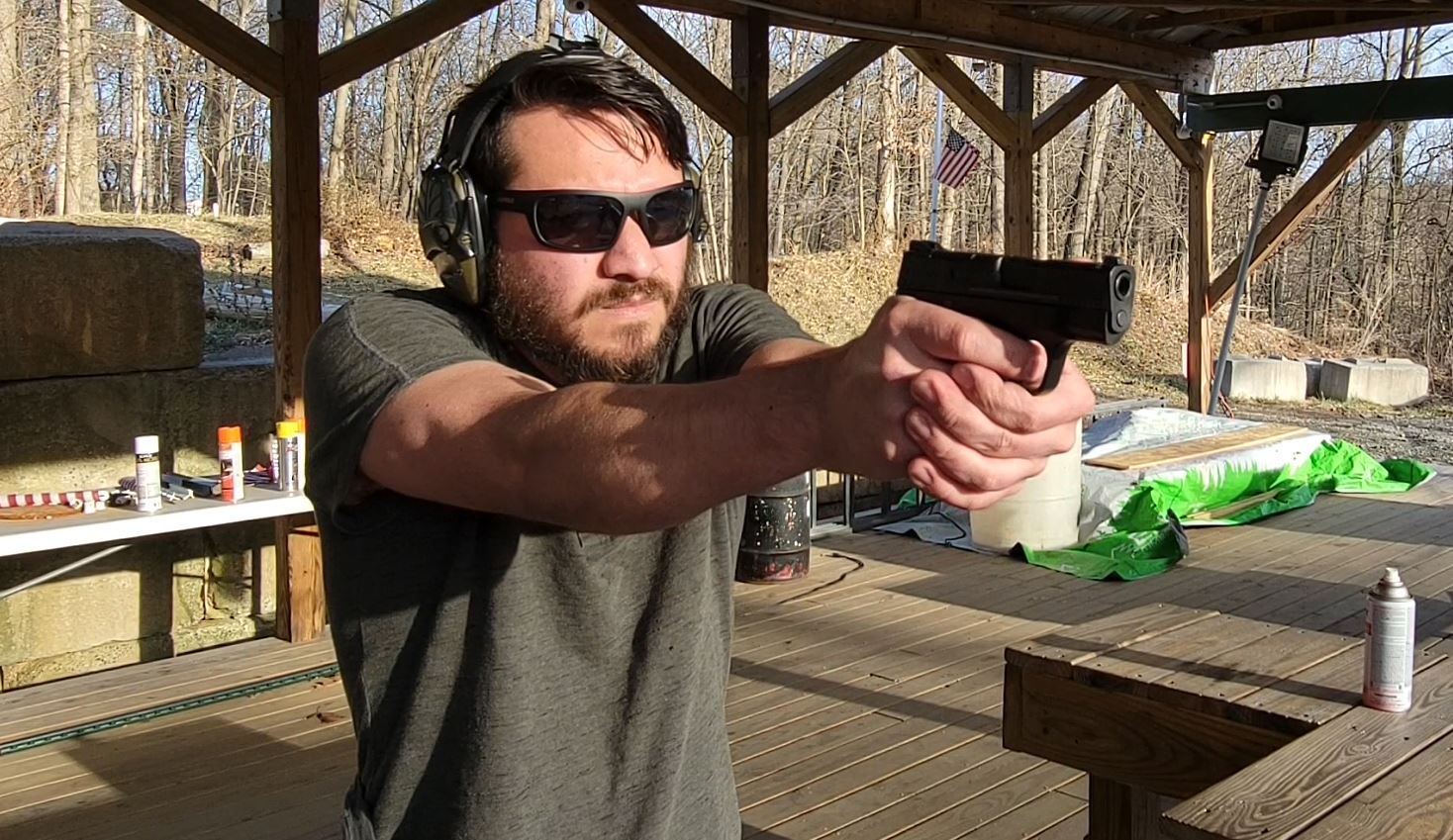 As a final note on range performance, if I could sweet-talk Smith & Wesson into doing one thing it would be to improve the slide release design. The slide release on the Shield Pistols has always been one of my biggest pet peeves about the design of an otherwise top-performing carry pistol. Right out of the box and with no magazine inserted, the slide release is probably the stiffest on the market which doesn’t bode well for fast reloads. Instead, with Shield pistols, I opt to “slingshot” the slide back into a battery over choosing to use the slide release. If they could improve this feature, I’d literally have nothing negative to say about the Shield Plus. 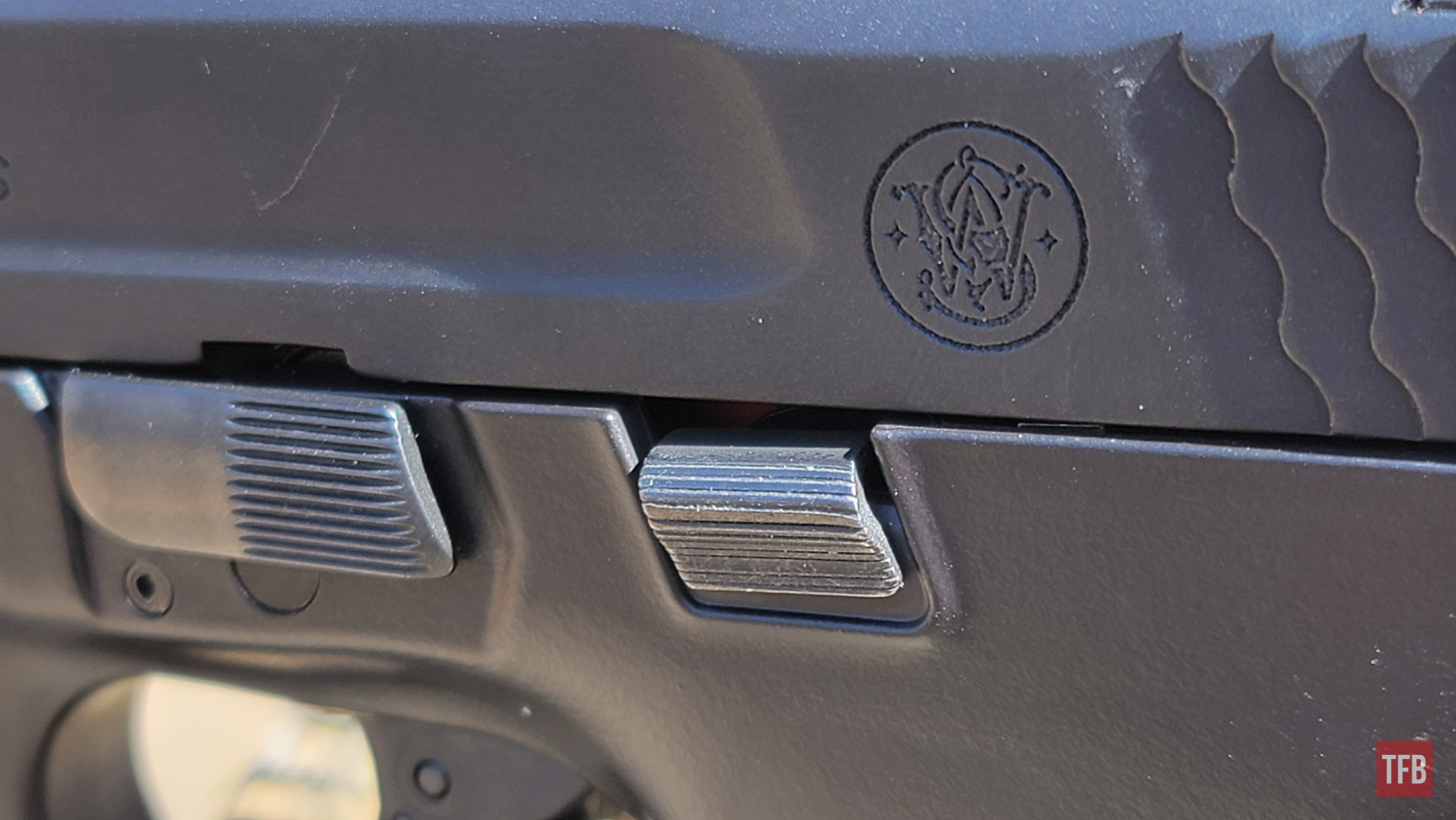 “It’s better late than never” is the common idiom and I think it fully applies in the case of the release of Shield Plus. Despite arriving late to the game, the Shield Plus brings legendary reliability, increased capacity, and improved features over its already popular classic design and I think it deserves a place at the table along with the other micro-compact 9mm pistols.

If you’re already heavily invested in another platform, I don’t see it likely that you’d want to switch over to the Shield Plus for the updated features alone. Although, you may be swayed by the combination of the improved features and magazine capacity. The Shield already started off as a superb pistol but I feel like the introduction of the Shield Plus makes the original Shield functionally obsolete.

To sum it up, Smith & Wesson didn’t set out to reinvent the wheel. Instead, the guys at Smith & Wesson put their collective heads together to make smart, thoughtful improvements over one of their existing designs to bring you one of the least expensive and feature-rich double stack micro-compact 9mm pistols available on the market.

We are committed to finding, researching, and recommending the best products. We earn commissions from purchases you make using the retail links in our product reviews. Learn more about how this works.