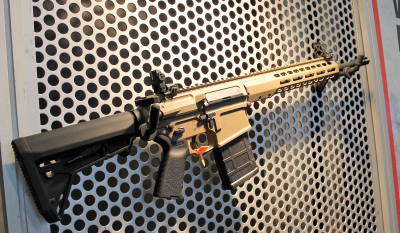 All controls on the REC10 are ambi. It sports a Raptor charging handle, ambi safety with 45-degree throw, and ambi bolt catch and magazine release.

Barrett reps say the REC10 barrel is made on the same machine as their .50 BMG precision rifle. It’s handsome as well as a dream for any family, range, or department that shares a rifle between right-and left-handed operators. MSRP on the REC10 is $2,995.

The REC10 enjoyed most of the limelight at the Barrett booth. But their Fieldcraft hunting rifle, available in numerous calibers as a bolt action repeater, also enjoyed a deserved prominent spot in the display, as a celebrated standout in the hunting rifle market. Available in 10 different caliber/barrel length combinations, the Fieldmaster has a lightweight, grey, carbon fiber stock, TImney trigger, and match grade barrel. MSRP starts at $1,879 for this rifle.

While there was nothing new about the Fieldmaster at the show, a Barrett rep did tease OutdoorHub writers with speculation that more chamberings, including 5.56 NATO, may be coming in 2019. Barrett fans will want to keep an eye on this one.