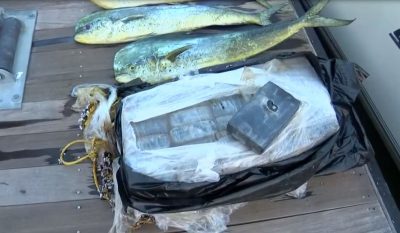 After two South Carolina fishermen reeled in a bag containing several bricks of cocaine, the Coast Guard and North Charleston Police are working to find where the drugs came from.

The deep sea anglers were roughly 70 miles off the coast of Charleston, SC when they noticed “debris” floating in the water with an uptick of Mahi-mahi jumping out of the water in the immediate area.

“We trolled past it,” WCSC reports one of the men saying. “Every time we passed by it we caught a fish.”

This apparently went on for three hours before the men decided to see what the debris was and why these fish seemed so.. energetic. So, they pulled a suspicious looking black bag aboard their boat, took a peek inside, and immediately concluded their day of fishing was over.

They contacted the Coast Guard right away, and met up with North Charleston Police officers at a marina where officers could examine the contents of the package, which turned out to be between 30 and 50 kilos of cocaine.

Coast Guard Lt. j.g. Phillip VanderWeit said the bag was holding an estimated street value of $750,000 and $1 million worth of illegal drugs.

“It definitely doesn’t happen off the Charleston coast every day,” VanderWeit said. “It’s a bit more common further south, whether in the Caribbean or the south Pacific.”