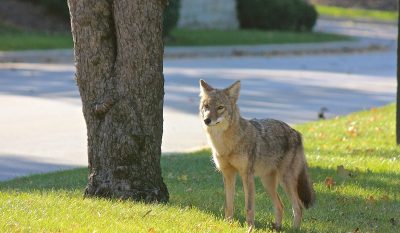 Coyote sightings around Metro Detroit are on the rise, and the wily critters are causing concern with city officials.

Earlier this week, the chief of police in Sterling Heights, select representatives from the DNR and other city officials gathered for an event tailored around “how to co-exist with coyotes” as the breeding season nears – which will likely lead to even more Metro Detroit coyote sightings.

Concern over coyotes? @MichiganDNR and @sterlingheights are getting reports from concerned residents, our story at 5:30a on @wxyzdetroit is coming up! pic.twitter.com/0vUrO4Xble

Just last month, we saw a coyote actively hunt a 5-year-old girl in Illinois while she was in her front yard. In that particular instance, the coyote appeared to figure out the little girl wasn’t the prey it was after, but it was a close call nonetheless!

Coyote sightings tend to be more prolific at sunrise and sunset. They don’t spend a lot of time running around during daylight hours, but as you can see in the video from Illinois, it’s not at all unheard of.

Check out this video from Michigan DNR on coexisting with urban coyotes:

My take? It’s not that hard to co-exist… but a little background helps. Here’s some from the DNR: pic.twitter.com/mhrkMn2j4w