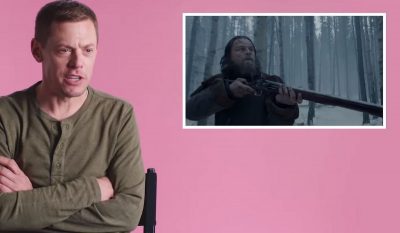 Film directors and producers will often go to great lengths to ensure every detail within their movies are accurate. However, when it comes to hunting scenes in these movies, the lack of knowledge and accuracy can be painfully obvious.

Perhaps you caught GQ’s previous video in their ongoing series where they brought in professional bow hunter Cam Hanes to break down a handful of scenes where Hollywood either got it right, or were way off base.

Well, in this ‘episode’ MeatEater’s Steven Rinella graces the GQ office to critique the flaws in hunting scenes from films such as ‘The Last of the Mohicans,’ ‘The Good, the Bad and the Ugly,’ ‘Wedding Crashers,’ ‘The Revenant,’ and more. Rinella hits you with a bit of knowledge, a few pieces of advice and of course some humor while getting his point across about the inaccuracy of hunting scenes in Hollywood:

Steve hit the nail right on the head with his observations here, and quickly picked up on the mistakes Hollywood made with tracking and the importance of wind while trying to stalk an animal. Also, Steve points out another mistake Hollywood makes, which personally drives me up a wall; That is filming the wrong animal in the wrong location.

This happens all the time in Hollywood, and we echo Steve’s thoughts on this one. It’s not only annoying to those who have a strong passion for the outdoors, but distracting to the point where it could change my entire opinion of the movie.

We also thought it was important how Steve touched on some errors he saw with firearm safety in certain hunting scenes. Too many times I’ve watched an actor or actress carrying a firearm on screen with their finger inside the trigger guard, and it makes me cringe every. single. time.

Do these details really get overlooked in screen testings? And why don’t the directors/actors/actresses consult with firearm experts on this stuff?

It seems directors today are at least trying to make an effort to inject more realism in their films, so hopefully these videos will contribute to that. For now, let us know which is your favorite movie that relates to hunting. We’re always looking for new suggestions!