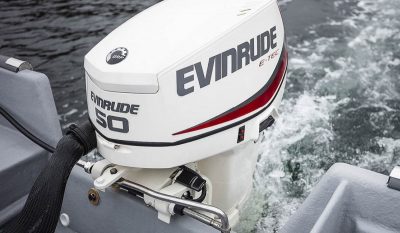 Mastering the art of trolling is an extremely effective way to cover large areas of water and put fish in that boat. There are several factors that go into proper trolling, but once easily mastered, these factors can help get you on fish faster. Speed control is paramount to success and the right outboard can make a huge difference in getting fish into your boat. There are a lot of options for outboard boat motors, but none offer better speed control than the Evinrude E-TEC.

Why troll, and what exactly is trolling?

Trolling is a simple idea, really. Basically, it means you’re going to use your boat and motor to cruise along at a slow pace while you have lines out with lures to cover a larger area of water. It is an extremely effective method for catching walleye, salmon, musky and other aggressive fish species.

To troll properly, you need the right equipment. Rods, lures, line and more is part of the equation, but there is much more to it. One of the most important elements to trolling is your motor, and Evinrude’s E-TEC series is arguably the best choice for several reasons.

Trolling helps you cover more water faster than by moving to spot-after-spot and casting. It also allows you to use the maximum amount of lines legal in your area. More lines means increased chances of connecting with fish. It also helps when targeting fish species that are actively looking for bait, such as when a school of walleye are on the move, or when targeting salmon in open water. Without the right motor, however, you’re going to run into issues.

Speed Control is Paramount to Success

There are several really strong reasons to set up a troll, and you simply cannot troll effectively without speed control.

Too slow and your baits will drag along with a horribly sluggish demeanor, but going too fast won’t do them any favors either. The key thing to keep in mind during a troll is you want to imitate natural bait. Done right, and you’ll trigger a predatory species’ instinctive response, meaning you’ll get a strike even if that fish isn’t active in a feeding pattern.

Optimal speed for trolling depends on the type of fish you are targeting and the bait you are presenting. For most species of freshwater fish, that is usually in the 2-2.1 mph range. This can jump up to 2.2 to even 3 mph depending on the size of the water you’re hitting. Great Lakes anglers trolling for salmon or trout usually are in the 3 mph range or slightly higher, depending on the weather and the time of year. The important thing to always keep in mind is to control the speed for the species and presentation, and that is the beauty of the E-TEC. Evinrude outboards have more throttle control to get your lures in front of fish at the right speed to trigger a strike.

Many anglers who run 18-19 foot long boats, run outboards in the 150/hp class. This can make speed control a bit tricky, especially when running one of the modern four-stroke engines that many manufacturers produce. Crank bait anglers run into an issue and often resort to a bow-mount electric trolling motor to maintain the right speed. That 2-2.1 mph range is the sweet spot for most crank baits.

A motor option to consider is an Evinrude E-TEC direct-injection two-stroke outboard. The E-TEC motors have been designed to be extremely efficient and meet or exceed all the EPS standards for emissions. The key here is that by the very design, two-stroke motors can run at slower speeds than four strokes of the same class.

“The Evinrude E-TEC motor on average will troll 30% slower than an equivalent four stroke,” said Eric Olson, Evinrude Product Specialist. “Anglers looking to troll with a 150/hp outboard can easily hit those ‘sweet spot’ speeds, with a motor that is more fuel efficient and runs quieter. It is a great option compared to the four strokes out there.”

What if you’re running a bigger outboard on your boat? We’re talking into the 200-300/hp range. These motors will certainly get up and move your boat across the water to reach the fishing spots well before anyone else. What they can’t do is troll. A motor of that size just can’t idle down to the speeds needed for effective trolling without something like a drift anchor, and even then, it’s not going to be easy.

This is why you see most serious anglers use a kicker motor. This is a secondary, smaller outboard usually in the 10-15 horsepower range. These motors will let you get into that sweet-spot speed and have optimal control to keep it there. Not all kicker motors are created equal though.

“The E-TEC 15/hp H.O. Kicker motor was designed as the ultimate kicker for trolling,” Olson said. “It is extremely quiet and has a troll control that lets you dial in a speed and it stays in that speed until you change it. Whether you’re running lead-core, planer boards or any other style of trolling. And unlike many other kicker motors, this is a direct injection motor. It won’t be cold-blooded for starting regardless of the weather.”

What Speed is Best for trolling?

We’ve given you the basics of speed for trolling freshwater. On the salt, it gets different, as the speeds increase with the fish species. You can be hitting much higher speeds in the salt than you would ever consider in freshwater situations. Ultimately, you’re going to have to determine what speeds work best for your water, fish lures and boat. One of the things we’ve noticed with the Evinrude E-TEC motors is that they give you more options for speed control, which is the ultimate factor in trolling success.

Evinrude has added a new technology to their larger tiller-operated E-TEC motors that will have anglers excited. The Digital Tiller is a fatigue-free way to operate the motor with one hand, including tilt and trim, along with throttle control. It also has Touch Troll, which allows you to dial in the optimal trolling speed and cruise along at that constant speed without worry. This is something we think other manufacturers will try to replicate soon.

How Important are Electronics in Trolling?

Electronics are right there with the motor in importance to a successful troll. Good electronics allow you to monitor speed, depth and bottom contours, as well as, notify you of target fish and bait fish concentrations. If you’re serious about trolling, you’ll have a unit with GPS and mapping technology that will allow you to target specific areas, and structures.

Another area you don’t want to overlook with trolling and speed are the thermoclines within the body of water. Temperature affects fish and their metabolism in a major way. Fish often move with the changing water temperatures and will hang on the edges looking for food. Be prepared to adjust your speed accordingly when there is an increase or decrease in water temperature in the depth you’re trolling in.

On top of their impeccable performance, E-Tec engines are ultra easy on the environment and even make your life easier at the end of season with auto-storage  The auto winterization feature fogs the engine itself in minutes, saving you a trip to the dealer. An Evinrude E-TEC engine does not require belts, camshafts or exhaust valves, which means there are fewer parts to wear down or malfunction than a four–stroke outboard.

This allows you to not only extend the life of your outboard, but also your boating season!

Take time to sit back and appreciate the journey.

#EvinrudeViews Thanks for the reminder, Riley Sandau

For more information on Evinrude Outboards, and to get a look at their 2020 lineup, head over to their website.

This article is sponsored by Evinrude