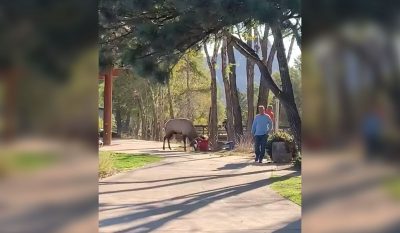 A woman visiting Estes Park in Colorado was pinned on the ground by a rutting elk after getting dangerously close to the animal. The whole situation was captured on video, which has since gone viral.

The video shows bystanders suddenly running away from the aggressive bull elk, and one man who hits the deck after tripping over some kind of barrier. The elk, however, seems fixated on the woman wearing a red jacket and appears to hit her on the head with his antlers knocking her to the ground.

That’s when this whole scenario takes a scary turn.

While the woman lays completely defenseless on the ground, the bull charges and nearly gores her with his giant, sword-like eye guards. The elk then takes a few steps back and the woman tries getting to her feet, but the elk charges again. In a desperate attempt to keep her distance from the elk’s antlers, the woman uses her feet to push the elk away.

In a second video, Brian Berg, an Estes Park employee, can be seen driving a Ford Ranger pickup truck in between the elk and the woman.

Berg stops the truck, and you can almost see the elk scoff at his efforts before slamming into the side of the truck with his antlers.

“I’ve never had to do that before, but I saw people in trouble and I figured I could get there quick,” Berg said according to Fox31. “I knew the best thing for me to do at that point in time was to get the truck in between them.”

Colorado Parks and Wildlife advises visitors to keep their distance from elk. The rut occurs during the fall, and bulls have been know to attack without ever being provoked.

“I wish people would give them at least a football field length away, especially the bulls this time of year,” Berg continued.

The woman who was pinned walked away without any serious injuries and did not seek medical attention. However, the man who tripped and fell apparently hit his head on a rock and was taken to the hospital in unknown condition, officials say.