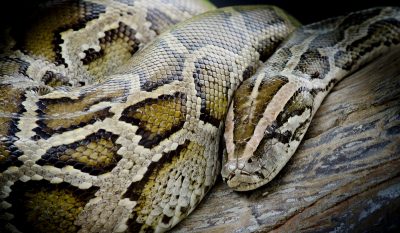 By now, you’re probably well aware how Burmese pythons are taking over the Florida Everglades, slowly eradicating one species from the region after the next. Well, it’s one thing to read about, but it’s completely different – and entirely uncomfortable – to see it in a video. Which leads to this post we saw on the Instagram account, @natureismetal, showing a python swallow a juvenile alligator.

And because swallowing a gator whole takes a little bit of time, the footage is sped up so you don’t have to spend all afternoon staring at your screen:

Posting this to hopefully answer a few of the questions from our last post. This is footage of a burmese python swallowing what looks like a juvenile alligator in the Florida Everglades. The footage is sped up because this could take a couple of hours for the snake to accomplish. A full grown burmese python can reach lengths of up to 20ft (6.5m) so even a full grown alligator has to keep an eye out for these beasts. •

by OJATRO IF YOU’RE INTERESTED IN THE FULL VIDEO PLEASE CHECK OUT OUR PROFILE AND LOOK FOR THE BURMESE VS GATOR HIGHLIGHT.

As the post states, the video above stems from another post on the account showing a scrub python choking down an entire wallaby. Evidently, some folks in the comments appeared confused how these snakes manage to swallow prey that’s twice their size..

This is a prime example why pythons pose such a threat to Florida’s Everglades. These snakes have no known predators in the wild and are reproducing at an astonishing rate, sometimes having hundreds of babies at one time.

Thanks to the South Florida Water Management District’s Python Elimination Program, we’ve seen some big snakes captured and removed from the area, however, they’re capable of reaching lengths up to 20ft long. That means even full grown, mature alligators are on the menu for this invasive species.