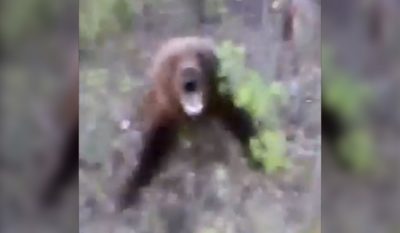 In this video, a Russian man gets served an instant dose of karma after pestering a young bear in the woods, and literally pushing his luck too far.

The bone chilling moment, which reportedly happened in Kamchatka, (East Russia) was captured in a short video which went viral online over the weekend. The man appears to have walked in on the bear just as it was waking from a nap, and instead of letting the animal walk away, he decides to pull one of the dumbest stunts you will ever see.

After hitting record on his camera, the man walks after bear and either kicks or shoves the animal from behind. At this point, even the bear spins around somewhat confused like, “did you just KICK me?”

Seconds later, the bear lets out a roar that will make your skin crawl, and promptly teaches his attacker a lesson:

Evidently, the man walked away after only sustaining an injury to his hand.. which seems a little too easy for a stupid stunt like that. He better consider himself lucky!