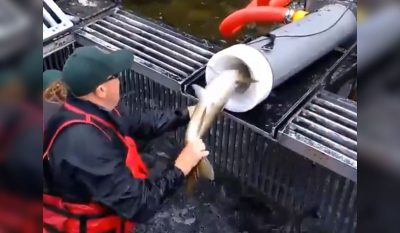 Whooshh Innovations was the talk of social media over the weekend, after video of fish being fed into the Salmon Cannon to shoot them over hydroelectric dams went viral on Twitter.

In the video, wildlife workers can be seen slipping salmon into a fishy contraption, designed by Whooshh Innovations, which transports fish via a pressurized tube and allows them to travel over ‘road blocks’ in the way of their migratory paths.

This special fish tube is much more than meets the eye, though.

See, it does more than just move fish from Point A to Point B: When fish slide through, they are scanned, photographed and sorted into the “appropriate tube.” The machine then increases pressure behind the fish, creating a seal, and off it goes through a friction-less “cannon” at speeds around 25 feet-per-second.

This salmon cannon transports the fish between bodies of water. (Via @CheddarGadgets)https://t.co/2eFQceFgzv pic.twitter.com/AHK0QJMCKf

The Salmon Cannon is capable of moving up to 40 fish per minute, Bryan stated. That’s roughly 57,600 fish per day!

These devices have been set up in 20 different locations in both Northern Europe and North America – and Whooshh is already eyeing potential projects in Brazil and Singapore.

Perhaps you’ve heard of this ‘Salmon Cannon’ before, as the video is a montage of older clips that have been circling online for years. But the video was resurrected recently after Whooshh gained significant media coverage thanks to a segment on John Oliver’s late night show ‘Last Week Tonight.’

For everyone just discovering the salmon cannon, please enjoy this segment from 2014: https://t.co/SEdMJppFA7