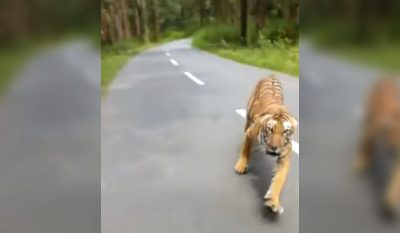 Two staff workers riding a motorcycle through a wildlife sanctuary in India narrowly escaped with their lives after being chased by a tiger.

The clip was shared on Facebook by the Forests and Wildlife Protection Society. It shows two people speeding through the sanctuary on a bike, when a tiger suddenly engages in hot pursuit behind them. The animal chases the bike down the road trying to close the distance before eventually disappearing into the jungle.

Certain details about the background of the video are unknown, but this wild encounter reminds us of the bizarre situation with tigers in another part of India, Sundarbans.

Here, tigers are known for being far more aggressive and behave like no other tigers around the world; in fact, these large predators have actively hunted humans for centuries. According to LA Times, dozens of men are killed each year by the 250 tigers believed to reside in Sundarbans, which stretches between India and Bangladesh along the Bay of Bengal.

Scientists have linked the tiger’s behavior to a lack of fresh water in Sundarbans, where the Bay of Bengal’s salty water flows through all the rivers. Drinking such salty water can potentially cause liver and kidney damage, making the tigers irritable.

“Even if the tiger disappears from everywhere else, it will survive in Sundarbans because it’s very inhospitable terrain to poachers. It’s also the area where they are most likely to be killed by tigers,” said Arin Ghosh, director of the network of tiger reserves established in India in 1973.

Animal Planet reports tigers have the ability to leap forward 20 -30 feet in a single jump. And according to National Geographic Kids, tigers can reach top speeds of up to 40 mph.

Knowing that, those two bike riders sure got off lucky!