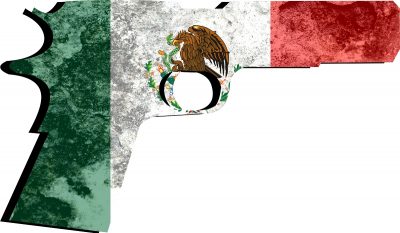 In Part 1 of this two-part series, the concept of restricted access to guns was covered, in terms of its application in Mexico. The country does have Second Amendment-like language in its Constitution, though the “bear” part of “keep and bear” was removed in 1971.

This follow up is a cursory examination of life of Mexican residents striving to live a law-abiding, peaceful existence under that country’s gun laws. Questions are posed to invoke sincere thought about where you, the reader, stand and what you’d do in similar circumstances.

Devoting time to ponder Mexican gun laws may seem far-fetched for a US citizen. Consider, though, that public health practices of “reduced access to guns,” discussed in Part 1, are exactly what Mexico employs.

Examples used here are based on personal communications with people who live, or have recently lived, south of the border, as well as grassroots online sources.

It’s no secret that homicide rates in Mexico are more than five times that of the United States. Some may argue, legitimately for the most part, that gun homicides are mostly associated with cartel activity. But victimization has spread well beyond cartel participants. Home invasions, theft of every variety, and kidnappings are rampant in many areas, not just border towns.

The manager of Mexico’s federal gun store says he wishes citizens wouldn’t purchase guns; they should rely on the country’s ample security forces. Personal communications with people from different walks of life indicate that security falls far short of perfect.

A firearms student who’s now in his sixties spent his youth and substantial portions of his adulthood on a family-operated ranch several hundred miles south of the US border. High, solid walls and gates around rural homesteads, he said, are the norm, for security and not style. Kidnappings for are a near-common occurrence when ranchers or their family members travel public roads.  Local police and/or Federales (national police force) do respond, he indicated, and rural cell service is dependable in most locations near his family’s ranch. In his experience, kidnappers prefer to stay near the roadside. Successful intervention by police, who utilize helicopters for patrol, happens, if the intended victim can flee on foot, off road, for the average hour it takes for law enforcement to arrive.

As in many countries, most civilians in Mexico are restricted to owning a maximum caliber of .380 for a personal protection handgun.

At a rifle marksmanship training of the Appleseed project, I had the privilege of working with a family—dad, mom and son and daughter, both under 10–who are US citizens, but working on a small farming and missions project in central Mexico.  Their motivation for learning to shoot .22s as a family? To be safe and effective with the air rifle they’re permitted to keep inside their home.  They live in constant awareness that, sooner or later, it will likely be their home that’s targeted by traveling thieves, doing the work of illegal cartels and taking what they want along the way.

We live in a country founded by armed resistance by common people against the tyranny of King George III. Peaceful citizens of Mexico often find themselves trying to stay solvent and alive amid internal wars. Local and federal police may or may not be trustworthy.  Cartels war against authorities and each other, their shadowy leadership changing constantly.

Drugs are far from the only profit centers for cartels. Mines, lime orchards and avocado groves, which have been the lifeblood of small communities for generations, have been taken over by cartel thugs.  Illegal harvesting of fish bladders off the California coast is even in their growth model.  Once-independent villagers are now enslaved to work in the businesses they built, the proceeds stolen.  In many locations, cartel wars have led to brutal killings. Villagers aren’t exempt from the violence as their assets and more are taken as pawns in ongoing conflicts.

Autodefensas, or local militias, are one form of self-preservation local communities have mounted. Staffed mostly by men and boys, not all of whom may be armed and those who are having single-shot rifles or shotguns, cobble plans together for patrol and protection. When cartels had completed their first siege of local life, in 2011-12, women stepped up and volunteered for community roles, i.e. police chief, traditionally occupied by men.  Those who once filled those roles have been murdered, kidnapped or run into seclusion due to the targeted nature of the jobs. At least one youthful chief who railed against violence, insisting that new recruits be armed only with “principles and values,” was summarily murdered.

We should not have needed to take up in arms against organized crime, we should be working in our professions or trades, in our parcels of land, or our business with our families.

The absence of government involvement against the criminals, to the total state of helplessness, that created an existence of a power vacuum; We the people have had no alternative but to organize, overcoming fear, with a firm determination to defend our rights, our families and our land,  the right the  Constitution of the Republic provides for. (Art. 35 fraction IV)

We took up arms because we had no other choice, there were only two options: self-defense or sacrifice and humiliation.

While the news is filled with the latest stunts of politicians and celebrities, it’s easy to forget that the battle still rages to the south—and the good guys are under-powered.  Rationing of ammunition for a police department that suffered mass casualties after an August 23 ambush was recently announced.

In places like California, Maryland, Hawaii, and New York, we already have miniature models of gun control, Mexico-style.  What’s your vision of the future of bearing arms in the United States?

The post Yes, Mexico has a 2nd Amendment – Part 2 appeared first on OutdoorHub.